Moving forward, I'll be posting my articles on my Patreon first, and after a delay, I'll post them my blog. I'll also hoping to post high-res of art, and maybe some of my development concepts that I don't post on this website exclusively on Patreon as a little bonus. Failures can be interesting too. I'm doing this for early feedback from my supporters - if I get any! It's still early days, and I have a long way to go to build up a following, any goodwill I may have had died ten years ago, so I don't expect anyone to follow for a while. At the moment I'm doing it all for me. There have been so many stops and starts over this last decade. It's been tough, but I'm getting there. My next post will be about my issues with creating art, as none of my future plans makes sense if I cannot paint again. It always comes back to art. The Titan image is from my first portfolio, some 20+ years ago, so don't get too excited 😛

This blog is where I post initial concepts to gain feedback. Have a look around and let me know your thoughts? Once a concept has legs, I create a page and add it to one of the sections of this site, be it Sciror, Spheres of War, or Warhammer. Pages often reference a blog post at the end to continue gathering feedback. Think of a page as the 'final form', that takes into account the original blog post and all the comment feedback. To see what I am up to, see: Business - Plan 2

Before you post, please read 'legal'. This is a moderated blog, and all comments have to be approved by me. I purge spam and images, and I tend to remove links once I followed and read them.

I'm reorganising my websites, with the aim on turning my hobby into a business, and produce Sciror (game background) and Spheres of War (ruleset). This is a follow up from Plan 1 from a while back. I'm streamlining so I am not spread so thin.

As always, I'll post everything I create for Sciror and Spheres of War on my websites for free. I'll create PDFs for download (edit: SoW Tactical Fragment 1 is now out), and compile related PDFs into eBooks and Printed Books for sale. For example: all the SoW Fragments will be collected together into a rulebook.

I've put up a Patreon account, which I add rewards to later, probably free eBooks? At the moment I think of my Patreon as a 'tips jar', to support my work. At the moment I have an empty hat, but with a bit more busking I hope to change that. Here is what I am planning;

END_OF_DOCUMENT_TOKEN_TO_BE_REPLACED

Rutger Hauer (23 January 1944 – 19 July 2019) played one of my favourite characters. I know he was the bad guy, but he was my hero. As a young man I felt his rage, and the impotence of not being able to change your life, resisting the pressure of conformity, and the power fantasies that breeds. Roy Batter found his God and made him pay, but I was not so fortunate, as mine was a bit more elusive. All of which made the end scene all the more impactful. Tears in the rain. One of the few films to move me to tears, and brought the nihilistic horror mortality to the fore in a young mind. His calm acceptance of his death, his dignity, the joy of life, and forgiveness had a profound impact on me.

I later found out the Rutger used his own words, and that scene is now considered one of the best in film. Rutger said he has an affinity with Roy, and it's ironic the character Roy died in 2019, and so did Rutger.

Many memories are being washed away as I age. Memory is funny like that: you only remember what you dwell on and distort your own reality. Something Marcus Aurelius bangs on about, that you forget all the little things you did to get where you are, but the little things, your habits, are what built your achievements. If you are not careful, you start to wonder how you got to where you are.

With Rutger's death, I'm reminded of this all, and over the past few weeks I had a good think about it, and I must confess: I love life 🙂

LOL. This is awesome. The creator seems to have made it as a critique, but is unaware of the meme that Donald Trump is the God-Emperor and the MGTOW monks as the precursor of the Thunder Warriors, who are the precursor of the Space Marines. I suspect that many edge lords are going to go nuts over this, and disregard the critique – after all: God works through imperfect vessels. I always find unintended consequences of our actions fascinating, that our small slice of objective reality, that we call the subjective, blinds us to everything else out there.

The sword has ‘tariffs’ on it, apparently the most powerful weapon a leader can wield in the modern age. I wonder if this really is a critique? I am not familiar with the current Italian sociopolitical climate, but I know more nationalists got into power. If I have it wrong, I wonder if Trump will hire it for 2020, because that would be too funny seeing this go through New York!

It's been a couple of years since I last posted on my blog. I had to step away due to family commitments. Now that my role as a carer is coming to an end, I find myself thinking about Philverse, Sciror, and WarSpike more and more. Lots of ideas have been running around in the back of my head while I've been away, no matter how much I tried to suppress them, and they are starting to bubble up to the surface. They need to be expressed; otherwise I'll explode, so I've starting to work them up.

As part of my Near Future designs, the first stepping stone of the Sciror timeline, I want to touch upon architecture, psychology and politics. Before I went on hiatus I started to think about these things, and how to lay a foundation unto which I build and justify the setting. My CORR housing post was my first outline of how to deal with a housing crisis in Britain, and how to build on the green belt land. I rendered up this image a couple of years ago;

These are 1-bed CORR hab-units, around 50 sq.m. (current UK minimum), along with a garden, built over the road, with commercial space inside, and parks outside. Using the real world as a basis for the design constraints the solutions, and forces creative thought. In being designed for real-world situations, they can be judged by anyone, and if they seem reasonable, they will be more believable. The idea is to make it easier to suspend disbelief and draw the reader in. We can then use these as a springboard for future developments, as it all leads to the Ecoria concepts. The nuke proof Ecoria are an extreme idea, they can be hard to accept, so I want to show the steps of how we get there.

END_OF_DOCUMENT_TOKEN_TO_BE_REPLACED

He was one of my inspirations growing up. I remember watching Aliens (1986) and walking away in a day dream. I then watched the original Alien on video (remember those?). His book the Necronomicon was amazing if a little sexually twisted 🙂 His art spoke to me, it showed me what a person can do if they put their all into something and the strange worlds they can create, worlds which have an impact. It's hard not to be moved, in some way, when looking at his work: a mix of attraction and disgust, that the horrors are more than merely grotesque they have an aesthetic beauty to them. It makes it more difficult to dismiss if deep down some part of you likes it, some base Id within.

I can't think of another alien design that comes close to classic xenomorph. I say 'classic' as most alien/ monster designs age, after a while they look silly, but the xenomorph still looks sick (in both sense of the word)!

I will miss his influence in the world. There really is (was) no one like him. Unique.

Hello everyone, I hope you are having a very merry Christmas and received all you wished for (and specifically told your family and friends to buy you!). May the alcohol flow and the food be plentiful - then roll on the New Year celebrations 😀

I have a feeling that 2013 is going to be a good year. Ed's fantastic Kickstarter goodies will be out around May, and I'll be helping out with website. I'm really looking forward to seeing what he comes up with. For my part I'll finally kick the WarSpike basic rules out of the door. It's been a long time coming, but I hope it was worth it. 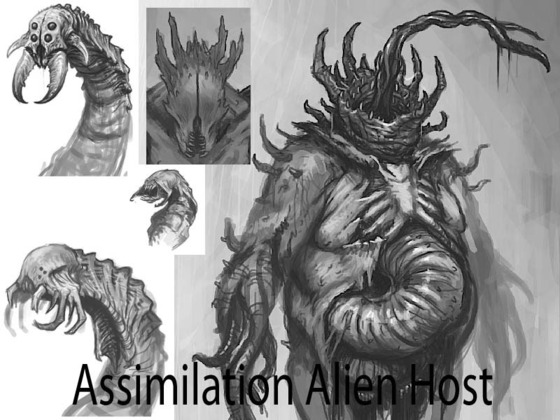 Some of you may know that I've been helping out Ed over on Troll Forged Miniatures. Ed has been busy these last couple of years developing a new spin-castable plastic, that is hard (75D), heat resistant, and easy to work with. This new material is called Trollcast, and the first box set of miniatures has been released: Andrew May's Armoured Halberdier Goblins.

These Goblins remind me of the the 80's classic film Labyrinth (staring David Bowie), with the wonderful custom and puppet designs by Brian Froud (and Ellis Flyte). They have quite a nostalgic feel to them, and at $10 for 10 the price take me back as well!