Well it took a while, but I got there in the end! I've separated out the 1000 chapter project onto its own website. It was getting a little neglected, so I brushed it up a bit and made it mobile-friendly. I've also updated and simplified the menu on both this website and the 1K project. This new menu further unifies the two websites and makes better use of the index pages.

While putting the links back in for each and every chapter, I noticed many had disappeared from the net. All told, we lost 119 DIY chapters! The enemies of the Imperium has cost us dear. This is tragic as many of them we really good, some with painted armies, all lost to us. I searched in vain for backups of them on the Wayback Machine. Losing so many concerns me. So, as a precaution, I've backed up all Canon and DIY chapters to the Wayback Machine and saved their urls. I've also used the backup links to non-Bolter & Chainsword, non-Lexicanum, and non-philipsibbering.com links. Thinking about the future, I've discussed the issue with Brother Tyler over on B&C, and hopefully we'll sort out a solution.

I'm moving the project to its own address, and it's taking a little longer to process all the chapters than I'd planned. Initially, I thought I'd bang this out in no time, and get back to Sow and Sciror. Since the last time I checked the list, which was a while ago, many chapters have disappeared from the internet never to be seen again. For the Imperium it's been an absolute slaughter (check this B&C post for an update of the carnage). This a shame as many chapters had been created by dedicated space marine fans exploring the 40K lore, some very inventive and creative, and pleasure to read. To counter this loss of 40K cultural history, I trying to reclaim the missing from the Wayback Machine (WM). Not much luck as most were obscure and were never crawled. To guard this heritage for the future I'm making new WM backups of all the processed chapters, but WM is a little flaky, and every now and then it grinds to complete stop. I'm trying to process around 50 a day. I'll post an update when the change over is finished.

Fellow Bolter & Chainsworder Gust0o painted up one of my Aquamarines for his ambitious Deathwatch 40K - Every Chapter Project. I posted the paint job below, which I'm sure you will agree is superb. Very crisp and professional. Gust0o plans to paint up one example of all the canon chapters and a select few fan chapters, and I am honoured he has chosen one of my chapters to include in his project. I'm hoping he works his way through the entire 1,000 Chapter Project, or at least the Canon and DIY lists 🙂

Fan projects like this are the life-blood of the 40K community. So why not pop by his FaceBook page and show support, lobby for your (fan made) chapter to be included (also swing by B&C for it to be included in the 1K Project), and if you have plans for a crazy project of your own then why not start today?

I've added alphabetical listing to the one thousand chapter project. Now you can quickly sort through all the chapters. I've also threw in first and second foundings on the canon listing. Since I've been away, GW has released a lot more information about many of the canon chapters found in the gallery, along with some new chapters (which I'll be adding). I'll be working through them all in my spare time, creating all the new images, which is time consuming so it may take a while. I've already sneaked in a couple of updates, adding in bolters for chapters we now know the bolter colours of. I'll post an update here for the canon chapters once done: a little mini-gallery of all the new chapters and changes made. In the meantime here is the Crimson Castellans, an update for one of the 'blanks'.

After that, I'll ask the mods over on Bolter and Chainsword to re-open the old submission thread. If they cannot do that I'll sort out a submission form here. Then I'll be able to take on new chapter submissions - I'm sure the Space Marine fans have been very busy while I've been away!

It's been a couple of years since I last posted on my blog. I had to step away due to family commitments. Now that my role as a carer is coming to an end, I find myself thinking about Philverse, Sciror, and WarSpike more and more. Lots of ideas have been running around in the back of my head while I've been away, no matter how much I tried to suppress them, and they are starting to bubble up to the surface. They need to be expressed; otherwise I'll explode, so I've starting to work them up.

As part of my Near Future designs, the first stepping stone of the Sciror timeline, I want to touch upon architecture, psychology and politics. Before I went on hiatus I started to think about these things, and how to lay a foundation unto which I build and justify the setting. My CORR housing post was my first outline of how to deal with a housing crisis in Britain, and how to build on the green belt land. I rendered up this image a couple of years ago;

These are 1-bed CORR hab-units, around 50 sq.m. (current UK minimum), along with a garden, built over the road, with commercial space inside, and parks outside. Using the real world as a basis for the design constraints the solutions, and forces creative thought. In being designed for real-world situations, they can be judged by anyone, and if they seem reasonable, they will be more believable. The idea is to make it easier to suspend disbelief and draw the reader in. We can then use these as a springboard for future developments, as it all leads to the Ecoria concepts. The nuke proof Ecoria are an extreme idea, they can be hard to accept, so I want to show the steps of how we get there.

END_OF_DOCUMENT_TOKEN_TO_BE_REPLACED

It's been a long time since I last looked at the 1,000 chapter project thread over on Bolter and Chainsword, and the last official update was back in 2012! Has it really been that long? I guess it has. So I had a read through the last part of the thread and collected all the updates, basically 5 new chapters (Dancing Scythes, Ghosts of Retribution, Helios Guard, Praetorians, and the Thunderbolts), and a few updated images (Black Guard, Libators, Patriarchs of Ulixis, and the Emperor's Shadows).

It was a lot of fun updating this, and reading about some interesting chapters!

Here is a link to the updated project: 1,000 Chapters

It seems a few fans are suspicious of the 1,000 chapter project, or rather the intent behind the project. It seems a common misconception that the project is attempting to set everything is stone. If this were the case it would indeed stifle creativity in the long run, and deny many fans a name of their choice because it is already in the list. This is not the case. Below is a reply to a post made on Warseer (it references the Warseer threads relating to the 1,000 chapter project).

END_OF_DOCUMENT_TOKEN_TO_BE_REPLACED

I've been messing about with the code of the gallery to try an make it easier to navigate and find what you are looking for. I have divided the main gallery into three (for now) subcategories: Canon, DIY, and MIA. Canon lists all the known official canon chapters that appear in GW material. DIY lists all the non-canon chapters made up by fans that have an Index Astartes (IA). The last subcategory is a bit of a limbo as it lists all the non-canon chapters that are missing an IA (MIA). I'm currently trying to hunt down all the IA for the MIA chapters. If you have any information please post in this thread over on Bolter and Chainsword: = Request for links to Chapter IA =

David, from Bolter and Chainsword, asked if I would like to create some Space Wolf accessories for the Space Marine painter. I am a huge fan of this painter app, and if you have not tried it; I strongly recommend you give it a go! I agreed (which was a bit stupid as I have no time - but who does!) and he sent me his template file. Anyway, I had a breathing space and created this prototype wolf pelt; 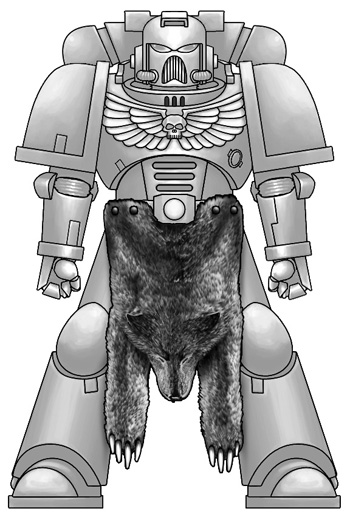 Nothing fancy, an eye candy filter (animal skin), a bit of burn and dodge tools for a bit of shape, and plenty of stylus jabs. It is not quite a regular wolf as it does have massive paws, it's more like a bear!

I plan to do a few more Space Wolf accessories, and perhaps some other bits and pieces for some of the other Chapters -  the Salamanders and Blood Angels spring to mind. I would like to do a lizard skin cloak or loin cloth, and some Blood Angel fanciness (Greek abs armour, mink lined cloak, various blood drop jewels). I have no idea when I can fit this in, there is no time frame, so do not hold your breath waiting on them!

I'm going to try and slip them in when I can, but they are a low priority (tacked on after all the other projects I'm involved in). It's more me having a bit of fun, and what I create for my own DIY chapters I can share with the rest of our community.

Anyway, we shall see how it all goes, and let me know what you think of the wolf pelt?

I started an discussion over on the Bolter and Chainsword forum that has been fascinating to me. I always enjoy hearing how others interpret the universe of Warhammer 40,000, and this discussion has shown to me how different other's views of the same text can be, and how deep those interpretations can go. I thought I was 100% right, but listening to others I see once again how wonderfully fluid the background really is, and the new ideas other's views bring to the table. I still think I am correct (I would wouldn't I! As I think my view tends more towards the background's ethos and intent, but these other views are very interesting). If you have the time and are a member of Bolter and Chainsword (if not, why not!) why not pop by and chip in your own unique ideas to the thread?

Basic argument can be found here