This chapter of the Adeptus Astartes was inspired by certain parts of British culture, tending towards the old 'firm' style of organised crime and manors found in the capital which has it's roots in the past. Basically an old world feudal system, with a strong martial tradition, used to organise the vast Hives consisting of millions of Ecorium, housing trillions of people. It is a form of decentralised government, with a cell like structure with common culture, and it seemed very appropriate for the universe of Warhammer 40,000! Now the hives, once mighty forges of industry, are in decline after suffering terribly at the hands of the Dark Elder invasion. 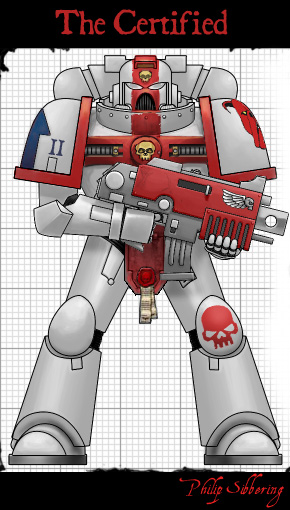 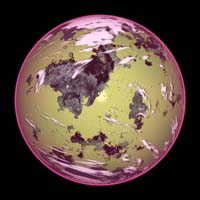 ALBION: is a desert world. Angland Province/ Concrete Jungle Super Hive (Britannia) is mostly subterranean. Hive Britanium is a massive sprawling underground bunker complex, centred on the skyscraping spire of the primus gravity lift. The Chapter's marble white fortress monastery, known as the 'Ivory Tower', encircles and sheaths the spire to form a mighty citadel. A massive gothic totem to the might of the Certified and the Adeptus Mechanicus, decorated with millions of screaming gargoyles and wrapped in void shields. Around it's base is the core of the Lance defence system. Each titanic weapon is a bastion of power, an island is the dunes of the desert, quite capable of striking targets in orbit. From the base of the Ivory Tower the network reaches out to the horizons on all sides.

Deep underground the Ivory Tower and the lances is the massive bulk of the Hive. It extends over most of the continent with a population of billions. It's a modification of the ancient Ecopolis system with an open floor layout design. The vast tiled hydroponic halls of the 'countryside' are filled with lush gardens with overhead panel lights embedded between riveted girders (think Victorian arboretum/ Kew Gardens/ Crystal Palace but all underground). As part of the water recycling system, recovered water is distributed via a sprinkler system, so in Britanium it 'rains' a lot. (Even in 40K we still have the great British weather! Best take a brolly 😉 ). The sprinkler system is also part of the fire suppression and control system.

The 'countryside' is run under a feudal (Manorialism) system with the hive being the divided in Manors and each Manor owned by a Lord who has sworn fealty to the Space Marine Chapter. The actual running of the Manor is down to the Lord's Villeins and his (or her) crew who work and farm the hydroponic halls.

In the centre of the countryside and around the tower is 'the city', technically Londinium Central Core (LCC) and its surrounding segmenta arrayed in a cross. It is the central manufactorium and trade centre and run by 'Freemen'. In has a diverse culture and attracts people from all over this sector of the Imperium.

Successor Chapter of the White Scars

Armour: White with a blood red cross and a few deep blue details.

Symbol: A blood red Bulldog (face bathed in blood) on a white background. It is the global mascots of Albion. It is because of this symbol the Chapter is also known by various nicknames: 'The Bulldogs', 'Red Dogs', and 'The Bloody Bulldogs'.

No rules bare knuckle prize fighting is very popular among the masses. Only those who have killed can enter the ring (usually as part of their punishment/ gladiators) Those who slay 50 killers in the pit are awarded the rosette, and are prime for recruitment (they are often serving as enforces). Usually by this time the are 'combat crazy', but some still have a mind and may elect to have freedom (they're going to let that back into society? Hell yes! It's only fair, after all he's fully rehabilitated :P) those some can't give up the killing and choose to become marines (well, the default is to become a marine, you have to 'opt out', and if 'mental' that may be impossible).

Notes: Youngsters race on the surface in souped-up dune buggies - Speed Freaks/ Bikes/ rampant insanity/ tats (and lots of 'em). Most notable fast attack from Hydroponic Complex Essicks. Various Manors regularly get into scuffles, and such fighting is considered healthy. Also they like to sunbathe in the boiling desert sun (quite mad!).

Those with Rose/ttes formed gangs, which lead to the 'War or the Roses'.

[Note: Should be some marriage stuff related to the rosette, like love spoons]

The Certified prefer small, fast, kill teams in a similar fashion to the White Scars. They make great use of scouts, to 'case' the target before a lighting strike. The scout and marine combinations form 'cells' using a combined arms doctrine, where the scouts are integrated with the other company's units. Each cell is usually lead by a veteran Sergeant, as sergeants are highly prized in the Certified's mythology (see 'heroes' below), with the battle brothers acting as the 'enforcers'.

The Cell: Most of the chapter is arranged into cells. In general each cell consists of 1 Sergeant, 4 scouts, and 5 marines. This can be changed with 'specialists'. The scout element is the eyes and ears of the firm and more ahead, with the marines close behind. When encountering hard points the marines blitz while the scouts provide cover fire. The scouts act as unit level designated marksman. The two usually 'leap frog' towards the target using suppressing fire, with the marines taking the brunt of the heavy fire, to force their way forward. Those within the cell are well used to working together and can advance quickly and excel in urban and hive combat.

The Certified are a non-codex Space Marine Chapter, and take after the White Scars with their war-band philosophy. The Certified are divided into 'firms' which are roughly analogous to a 'company' except the whole hierarchy of command is self-contained in a firm. The only 'company' is the first company, to which all the firms pay fealty.

Each firm (company) is divided into units, except the units are 'combined arms' and combine two elements. The two elements form 'cells'.

Each firm also supplies enforcers for local Lords in the from of scouts (rare) or neophytes (common) for when things get out of hand. There is a hazy transition between the marine and the enforces of a Lord. The Enforces of the lords often go on to become marines, and most enforces are recruited from those who win prize fights.

Pathological hatred of the Eldar (all of them).

Heroes. Sgt (sergeant) Georgios (George), slayer of the Fire Dragon Exarch (The Parable of Sgt George and the Dragon of Fire). Sgt Georgios was leading a team of the Sons of Sparta in an ambush of the Dark Eldar, when they were attacked by the Fire Dragons of the Eldar. Most of the Sons of Sparta were slain in the ensuing combat, but Sgt Georgios slew the Exarch. The certified (pre-marine) of the era saw this and the legend spread.

When the new Space Marine Chapter was formed by the Sons of Sparta's progenitor Chapter, there was no shortage of recruits. The Sons of Sparta are a direct 'brother' Chapter of the Certified. Sgt Georgios is now serving as the captain of the first company of the Sons of Sparta, but before then he has lead a Deathwatch kill team made up of Marines from the Certified who hunted Dark Eldar. Sgt Georgios is the patron saint of Hive Britanium, particularly in the Anglia (England) super-complex where the famous slaying took place.

Distinguishing Features: The Certified have a quirk of the White Scars for ritual ornamentation, but instead of scars they favour tattoos and sleeving. These designs are carried over and worked into the Black Carapace. Whole Chapter histories are etched into flesh and carapace 'least we forget'.