This based on Basian (Barbados) culture which is very strict and religious (similar to Victorian England), they abhor magics, and have many strong women in prominent roles within society. The Tridents therefore do not have an Psykers among their number. They view the inclusion of Psykers in a marine Chapter or any Imperial organisation as fundamentally destabilising to humanity. The Sisters of Battle have an order situated on the same home world and are constantly monitoring the population for mutants and wytches, and this suits the Tridents. 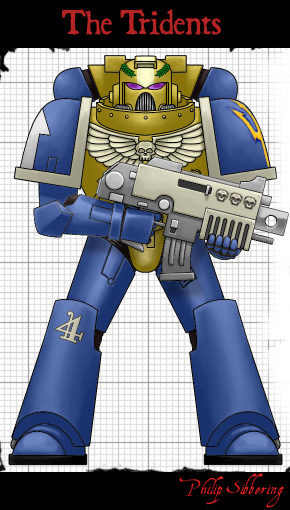 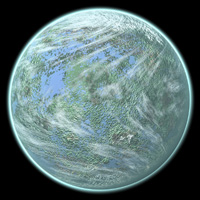 Barbadus III: Also know as ‘Little Terra' (after the idea of Barbados is referred to as ‘Little England'). They also have the original design of the Imperial Fists palace though smaller (in the same way Barbados has the original Nelson's column). Barbadus is an ancient and lush paradise world. At some point in the far distance past it was struck by a meteor shower which created the myriad of archipelagoes that cover the world. The sea is relatively shallow around the archipelagoes and has many coral reefs which rise up above the sea, and much of the land mass seen from orbit is in fact these coral reefs. It is unusual, in that it is virtually identical to ancient Terra, with a perfect match on environment. It is event the same distance from the sun, and has the same year cycle.

It is considered a 'Noble World' and many Imperial nobles live here.

Not a place to recruit marines? That's not counting on the religious and harsh moral nature of the population.

Successor Chapter of the Imperial Fists

The Tridents (of the Emperor) are Barbados inspired Space Marine Chapter

This Space Marine Chapter was originally formed from those serving as Primarch's body guard who all carried the Electo-Trident, a badge of office and from which the name of the Chapter is derived. The Body Guard were elite 1st company (1st legion Chapter) marines of the Imperial Fists. These exceptional marines were the basis of the Emperor's Spears, which are believed to be a 2nd founding Chapter but it has not been confirmed. The Emperor's Spears were a massive Space Marine Chapter and contained far more marines that the codex 1,000. Later it was subsequently divided into three to bring it within codex limits. The Tridents are one of these three.

Symbol: A yellow Trident on blue.

The Basians live in a very strict and religious society (similar to Victorian England), they abhor Psykers and magics and the Sisters of Battle have an order situated here and are constantly monitoring the population for mutants and wytches. As such the Tridents do not have any Psykers among their number, and view the inclusion of Psykers in a marine Chapter or any Imperial organisation as fundamentally destabilising to humanity.

The Sisters of Battle and the Tridents work quite closely together, often working in unison on missions of Psyker hunting. The sisters even go so far as to allow Anti-Psykers (pariah-gene) sisters to join Marine units to suppress Psykers during conflicts. This is an unprecedented level of co-operation between the two organisations, and is only allowed due to the zero tolerance the Tridents show to Psykers.

Heroes: The Chapter Master, Lord Ryvern is tall for a marine getting on for 9 foot! He has dark skin, angular features and high cheek bones. Like the Imperial Fists Primarch he has violet eyes (originally green – yep, some Basians have green eyes!), a variance caused by the geneseed and considered a blessing of ‘true sight' among the Tridents. He has been Chapter Master for over 600 years, and at the forefront of some of the biggest anti-cultist crusades, tracking down the foul minions of Chaos where ever they run, even razing whole hives to the ground to find his quarry. Lord Ryvern goes into battle armed with two powerfists with enhanced strength allowing him to wield one of the Chapters holy relics, the Trident of Ezekiel.

In general a codex Space Marine Chapter, but 1st company and scout company has 'modifications'.

Specialist Weapons: Electro-Tridents or Shock Tridents. The weapons are not 'power-weapons' lacking the power field's enhanced penetration ability. Instead they use electric pulses to stun a target and incapacitate them instantly, before torturing them to death or inducing instant heart explosion syndrome. Any strike on a target that allows two or all three of the prongs to stab the flesh will deliver a massive shock. Even super massive monsters can be taken down with these weapons. They are exceptionally vicious and effective weapons and the hallmarks of all three of the Trident Chapters.

Tactics: The 1st company is non-codex, it lacks any terminators, and is organised into three man kill teams. The kill teams are arranged in a tight triangle formation, with the 'point man' being flanked by two wingers. The point man is armed with a power-shield and a shock trident. The wingers are armed with bolters. The whole kill team act as one, and move as one. The point-man also serves as an ammo store for the two wingers, and carries extra ammo on his back pack (enhancement of the 'buddy system')

The point-man's job it to break charges (set shock trident vs charge) and to provide cover for the wingers. The wingers job is to take down foes as quickly as possible and follow the point-man. The point-man is the leader and veteran and will be usually charging full tilt toward the enemy. Those the point-man stabs with the shock-trident as paralysed and are automatically picked off with head taps from the wingers. It is vital that the point-man is highly aggressive, because static kill team is a dead kill team.

The formation also appears in the scout company, where the veteran sergeant is armed with a shock trident and the scouts with pistols. In this setup the veteran rarely carries full power-shield, instead replacing it with a bolt-pistol, plasma gun or combi-weapon.

The believe in the Ghod Emperor and his divine power, but they also believe in hell and the daemons of chaos.