Counterparts to the Space Sharks, and protectors of certain powerful Navigator houses. The are a law unto themselves (like all the Shark successor chapters) and virtually ignore the Imperium. They are the hunters in the dark, who dwell deep in the warp, only rushing to the surface to ambush prey. The Inquisition suspects the worst but how to catch them? 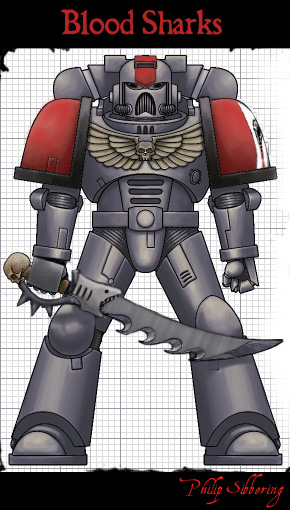 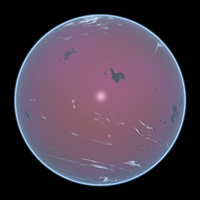 Blood Moon: The Blood Sharks maintain an orbital shine around a red, super dense, moon orbiting the gas giant Cron. The surface of this moon is covered in a sea of viscous blood red liquid, with few volcanic islands, all under a vivid blue sky. All life on this world can be found in the deepest depths of the sea, huge ecosystems built around the volcanic vents of the sea floor. It is here, in the deepest depths, the mythical Blood Shark prowls. The avatar of the Chapter, unto which The Blood Sharks sacrifice captives. (The Shrine is also used for other nefarious purposes too...)

Successor Chapter of the Space Sharks

The Blood Sharks are part of the shark trinity of the third founding, which include the Space Sharks and their 'twin' the Iron Sharks.

All Space Marine Chapters are antonymous armies in their own right with an alliance to the rest of the Imperium. Some Space Marine Chapters have strong ties with all the institutions of the Imperium, others and are far more selective. The Blood Sharks, like all the shark chapters, are unreceptive to pleas originating from any institutions other than those they are directly involved with. In the case of the Blood Shark they only respond to the Navigators, and their direct Adeptus Mechanicus allies (an alliance outside the normal Imperial structures). This stems from the fact that their only true alliance is to the Emperor, and their duty in following the task he assigned them before the Heresy (standing orders never countered by the Emperor).

Some of the greatest Navigator Lords are at the helm of Blood Shark strike cruisers and this give the Blood Sharks are huge tactical advantage in their clandestine missions.

Primarily the Blood Sharks hunt down enemies of the Navigators, be they xenos or human. With the Navigator Lord at the helm the Blood Sharks can dive far deeper into the warp than any other craft and therefore are incredibly fast, often able to intercept prey with huge initial leads in warp travel. A favourite ploy is leave late, track deep, to hide in dark wells of the warp hidden from Psykers, and ambush when their mark's contacts arrive at the rendezvous point. Killing all they find.

Tech: Due to their strong ties with the Navigators and the Iron Sharks (both with strong ties to the Adeptus Mechanicus), and considering their covert nature, many of the ships of the Blood Shark are from the great crusade and in excellent condition. There ship are full of archaeotech, mostly to enhance their hiding ability. They leave no survivors and are very careful in their engagements.

Inquisition: The Blood Shark believe their is no higher authority than the Emperor and therefore enforce their standing orders over all others. They will not tolerate the inquisition interfering with the Navigator houses, or obstructing the Blood Sharks in fulfilling their duty. Any act that runs counter to their orders is considered an act of war. In such cases the Blood Sharks have been known to receive aid from the other sharks, combining forces and falling into something akin to their 'legion' organisation. This is prohibited by the codex and tantamount to heresy in the eyes of many. However, the sharks disband quickly after killing, making it very hard to prove.

It is believed several Inquisitors have been killed by the Blood Sharks, and it is rumoured among the other Space Marine Chapters that they have destroyed companies and squads of loyal Space Marine Chapters (the most infamous being the disappearance of an ultramarine squad of the 4th company who invaded a Navigator safe house in search on rebels).

Shrine: The shire is used to take captives. These captive are usually enemies of the Navigators. It is here confessions are extracted before the victim is fed to the beast below.

The Chapter is organised into three companies that maintain their own ships and the remainder are divided into squads and assigned to Navigator ships as need be. These Navigator ships are private, and not directly part of the Imperium and have a form of 'diplomatic immunity'.

Recruitment: From the Rogue Trader fleets guarded by the Space Sharks.

The Great Blood Shark is an avatar of the Emperor's rage, and consumer of the damned. Through consumption is redemption.