This chapter was inspired by Chinese myths and legends of dragons. After working up the Alpha Legion's MO and contemplating how they take over a chapter, and the misunderstanding that grow through secrecy, I figured the 9 dragons (well 8 really) could be the heads of the Hydra. As such the isolationist Dragons seemed to be an ideal Chapter to be suspected of an Alpha Legion Cell, but are they? 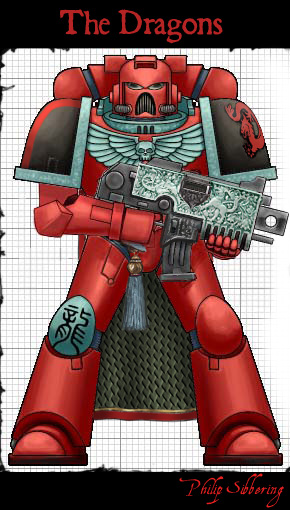 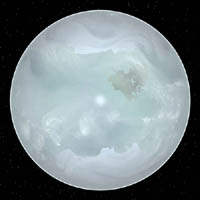 Zhoukoudia: is a water world, with orbiting space stations linked by gravity lifts to the massive Hives below that rise out of the sea. The original submerged Ecoria (Stage 6 variant) have been built upon over the millennia until the cities rose above the sea. Much of the 'hydroponics' is a variant marine (sea) version fully submerged.

Successor Chapter of the Crimson Fists

The Dragons are believed, and they claim, to be a successor of the Crimson Fists. This has not be conclusively confirmed by the Inquisition who suspects that they may be Alpha Legion, or have been usurped by Alpha Legion. This rumour has been compounded by the fact that the Adeptus Mechanicus do not take a gene-seed tithe from this Space Marine Chapter under some archaic treaty dating back thousands of years. In response the Dragons point out that it was rogue Inquisitional elements that made this claim, who were discredited, and they assert their rights of autonomy. These rights are unusual as they are enforce by a specific high lord edict.

Armour: Red base with black shoulders and jade trim. the Jade trim is carved with scenes of ancient history, pictorial representation of myths and legends. it is similar practice to the Imperial Fists scrimshaw of bones.

The Dragons are organised around houses each associated with a Dragon of ancient Terra myth. These Dragons were taken as symbols, and personifications, by the High Warlords of the Techno-Barbarian houses of the Pan-Corporations. These mighty leaders negotiated with the Emperor during his unification of Terra at the end of the age of strife. These fearsome warriors, the greatest of all ancestor heroes, fought for the Emperor and later become full marines. This link is believed by the Adeptus Mechanicus to be the reason prime examples of Mark 1 Thunder Armour are held by the Chapter's vaults.

They retain many teaching of war form those ancient times. Each of the Dragons has it's own style of close combat and bolter-art.

Notes: Fight between the Dragons and 'Imperialist forces', a 'rouge faction' of the Imperium under the influence of Inquisitor Maximilla Von Napier seeking to gain control of the Dragons. Fight to enforce Space Marine Chapter autonomy.

After the successful Dragon taking of Hainan, Inquisitor Maximillia Von Napier made accusations of corruption and links the Dragons to the Alpha Legion, with each dragon being linked to the head of the Hydra. She commandeered two navy battle ships to take on the Dragons but the Dragons infiltrated and destroyed the battleships. Furious at her defeat she left for holy Terra only to die in transit from fever, the ship developed engine problems and her body was returned to Zhoukoudian where it was cremated as part of quarantine control. Her ashes are stored in a secure facility in the Macau Hive complex Alpha. The Dragons have refuse to return the body and after an Inquisitional hearing Maximilla was declared a heretic.

(The dragons are taken from Chinese myth. Dragons are strongly associated with the water element.)

The Dragons are a non-codex Space Marine Chapter.