This a re-image the Space Sharks that first appeared during the Rogue Trader era of Warhammer 40,000 (first as mere transfers in the early plastic vehicle kits like the land Rider). There were never really developed any further by Games Workshop. Based on the simple premise that 'space' was the 'sea' (much like the Imperial Navy is in space, or Space Marine, where 'marine' is a nautical term) I imagined how the Space Sharks could work to this image in 40K? I went for Privateers!

Note: GW, via Forge World, came out with Carcharodon Astra (Space Sharks in High Gothic) which means this is obsolete. However, if you read my article on 'canon', you'll know that GW is a bit loose with the canon, so if prefer this version you are welcome to use them 😉 I'd also say this is the real chapter and the Carcharodon are chaos space marine infiltrators impersonating the space sharks. As these imposters are insisting on high gothic for their name (who does that?) they are obvious perfectionists born of Fulgrim the Primarch of the Emperor's Children... 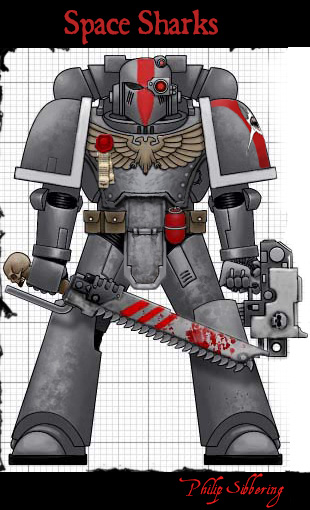 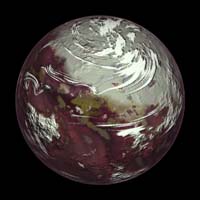 Mordriana Originally the Space Sharks were not assigned a home world, but instead where attached to multiple Rogue Trader fleets. However, after the Badab War, they were given the Mantis Legion's home world. Those stationed on this home world paint their shoulder shark symbol black (mostly 6th Company 'Black Ops' reserve, with 'implant' tech).

Successor Chapter of the White Scars

During the Great Crusade the White Scar legion took on much of the scouting duties. They went far beyond the ever expanding boarders of known Imperial space. They earmarked their discoveries for subsequent conquest and pacification by other legions, and escorted Ambassadors of the Imperium to worlds wishing to re-join their fellow man in the Imperium.

During the Heresy, the 296th expedition of the White Scars where far out on the eastern fringe and cut off from all communication. It was many years later, on their return, that the expedition was to learn of the catastrophic events that had transpired in their absence. They were informed of the break up of the legions. That each Chapter within their Legion had been singled out into its own autonomous army, and the Chapters of the 296th were to be singled out also.

It was these 'legion Chapters' of the 296th expedition that formed the first ‘Sharks’ Chapters (third founding). The first were the Space Sharks, and after a reorganising the remainder, the Blood Sharks and Iron Sharks soon followed.

Armour: Codex Grey armour, with lighter grey trim and a bright red stripe running down their helm. Suits of Mrk3 and Mark6 predominate.

Symbol: A face on Great White Shark with open mouth over a broad red stripe.

The Space Sharks are Privateers (sanctioned pirates) in the service of the Rogue Trader fleets they are attached to. They are there to provide the teeth to the fleet and perform raids into alien space, harry shipping and secure cargo.

When the Space Sharks fleet is out hunting it is divided up into lone Sharks (strike cruisers). These Sharks surprise attack/ ambush ships and outposts at long range before quickly sinking away before their victim can retaliate, only to re-engage later. They like to hang just outside a solar system and attack ships emerging from warp space at the warp zone. They use Librarians who can feel the approaching ships in the warp and know where it will emerge. If many targets are within an area it may attract more than one shark. Multiple Sharks engage as a loose skirmish unit (in that they remain 'independent' and maintain inter-ship communication silence at all times).

They employ this hit and run tactic until a swipe causes serious damage. If the ship is unable to run, the sharks will circle in for the kill. At this point many strike cruisers may suddenly appear, from the depths of the warp, for the 'feeding frenzy'. The sharks tag team the ship, systematically stripping its protection systems, before launching all out assault pod boarding actions. Their aim is to take the ship intact.

In character the Space Sharks are laconic, and go about their work with a single mindedness. All they do is watch, hunt, raid and talk to other Space Sharks. They have communication with the Rogue Trader fleets, but usually only through blood relatives (primarily mothers and sisters).

The Chapter is organised around their ships, with each ship housing a company. It is suspected that some of the larger ships have much larger companies than is considered codex, while some of the smaller ship have much smaller companies. The exact number of companies is not known, as they are not marked in order as the codex specifics, but by ship. Even their Chapter badge changes to represent a type of shark.

Mandate: The Imperium allows and encourages the Sharks to invade nearby Alien territories to reclaim technology and goods. These Marines as quite adept and obtaining technology and many carry scrolls of MCP (Mechanicus Certified Privateer), looking for specific gear to recover. STC is always high on the list, but alien tech always sells.

Tactics and gear: The Space Sharks are superb assault marines, though they do not use jump packs or dreadnoughts. They have very few Terminator suits, and make great use of scouts.

Favourite weapons are chain-swords, and chain-blade combat accessories. They also favour 'metal storm' bolt rounds/ and canister shot, as they inflict much damage on living beings, but far less on the ship. Gas weapons and red smoke grenades are also popular.

Specialist: The Space Shark's have an enhanced echolocation system, as they often hunt using the auto-sense's bio-sonar system (the big grill on the helm). The auto-sense system constructs the mind image as normal, so to the marine little is different. It is used to board cold ships (ones with no power, or in conservation mode), as visual and heat sensors are often useless. This gives the Space Sharks the classic 'dead eye' look of their name sake.

Ampullae of Lorenzini, are an adaptation not quite the same as a shark. It is a warp sig enhancer, Space Sharks can track the living. It is plumbed in through the Omophagea. Only the 'point man' is given this equipment.

The Fleet is all important to the Space Sharks , and the Space Sharks have there own naming conventions for their ships based of ancient shark names. All Ship names are double barrelled with the first name as the 'Class' and the Second as the ship's name.

HQ: I would imagine that the Megalodon would be the 1st company and perhaps a few others.