Based on Viking culture and mythology with an extra twist and ramped up to the max. They are named after a particularly gruesome method of torture and execution called the Blood Eagle. I wanted to make a truly psychotic chapters with a melancholy view of the world. These marines are crazy. 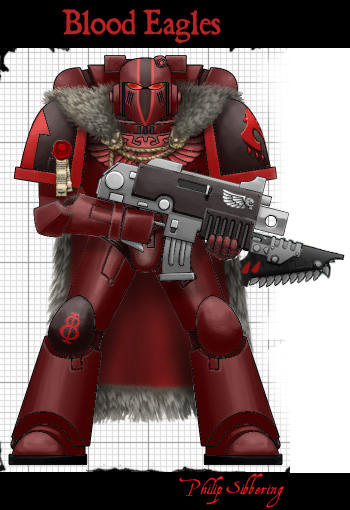 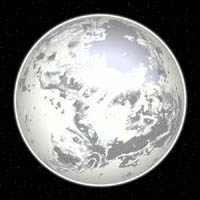 Scando V: A death world of ice. The surface temperature is -80 at the equator during summer. There is no life on the surface of Scando V other than frozen biological agents held in suspended animation, remnants of a long forgotten war waged thousands of years ago.

All the humans are contained deep within ice caverns, mined from the living ice and reinforced with plasteel to make bio-dome sanctuaries. The tribes of Scando V are in a constant state of warfare, fighting for the right to live and claim the resources of the bio-domes. Those who die have to be fed into the reprocessing units or the whole system will fail.

Successor Chapter of the Lamenters

Born of the Lamenters and their cursed luck. Records are sketchy due to the misfortunes of their progenitor Chapter, but it seems likely that they are a 22nd founding Space Marine Chapter. The Blood Eagles have been twisted by fate and the curse of Sanguinius into deeply spiteful and exceptionally violent Chapter. The only thing they hate more than themselves is everyone else!

Recruitment: It is from the loosing tribes of the inter-tribe dome wars that the recruits of the Blood Eagles are drawn. Those young males who have lost the right to life through their father's failures, are marked for execution via death matches. Within the arena they are pitted against their own tribal brothers; else their female relatives be put to the sword. If they win their mothers and sisters (and occasionally daughters) are spared and taken into the winning tribes families.

All Blood Eagles start their journey to become a marine with the blood of their kin staining their hands, and the execution of the women folk of their fallen brothers seared into the minds. All Blood Eagles are filled with a deep self loathing and hatred born of this loss.

In time those who survive the arena may become all powerful marines, yet they do not take revenge on the winning tribes. Instead their spite is tempered by the veterans marines into ruthlessness of action, and when they are elevated to full battle brother they join the others and become the guardians of the system and enforce the draconian rules. They also stop all further building and artificially limit the tribes environment (this is to stop any contamination via potent biological agents thawing out from the ice). They also keep an eye on their female relatives and ensure they are treated well.

Rage, hatred and self loathing seems to nullifies the bad luck of their progenitor Chapter. Therefore the marines dwell on their dead, the names of their tribal fathers are plastered all over their armour, constantly reminding themselves of their family's shame. They have a morbid sense of humour, and often bait each other about weakness, inducing rage and beating each other senseless in furious unarmed combat.

Each marine of the Chapter strives to regain their honour and become a member of the high house. The only way to archive this is by killing, and the Blood Eagles will kill anyone or anything, not that unusual for a marine yet is the method and extent that beggars belief. Their spite and aggression is all consuming, they are the executioners of worlds, and in their rage no mercy is ever given. Their favourite method of killing captives (who they hate above all else) is the 'Blood Eagle' signature move, where the victim is thrown face down, their back split open with a winged axe and their lungs pulled out a splayed over the shoulders to form angel 'wings'. The Blood Eagles view this as returning the dead to the Emperor's grace, and deem it a natural and correct state for humanity!

Psychology: Hatred of everyone, especially weak and cowardly humans. They also particularly hate the innocent, which they see as a corrupt and indulgent mind set born of a weak society. Nothing gets you killed quicker than saying 'I'm innocent!' or 'Please don't kill me'. However, they have been known on occasion to allow women to live if their men folk put up a good fight, or their mothers fought well to protect children. They have never been known to let a man live who are in their presence.

They do not work well with allies. They will kill/ beat IG and ship crews on sight. They will fight bare handed with other marines as part of their 'bonding ritual', and call other marines of other Chapters all the names under the sun to provoke a fight. Marines who refuse to fight will be attacked for real.

The Chapter is non-codex and divided into two houses: the low house and the high house. The high house is basically analogous to the first company, consisting of all command and specialist marines. The low house is all the regular marines, divided into war bands led by a sergeant of the high house. The war bands are in a constant state of flux and change almost on a daily basis according to the results of the daily fights of morning practice. The marines fight all the time, both playful sparing and full on murderous rage (Bionics are common, though considered a sign of weakness and failure), but scores can only be settled during morning practice. Any killing outside morning practice is considered 'traitorous'.

In time of war, sergeants pick marines from those who are combat ready, and often pick whole 'gangs'. Gangs are marines who stick together and are doing well in the daily fights.

It is entirely possible that a marine can be killed by other marines in the daily fights, though often strong marines are not killed but join the winning gang. Powerful gang leaders become sergeants in time, and appoint a 'second' to run their gang (Killing/ beating a 'second' makes you a second).

Though psychotic, they understand that being part of a gang increases their chance of getting into the high house, therefore the keep those they need alive.

Specialists: Marine hunters as part of the Inquisition (they like nothing more than killing other marines!).