The theme of this fan-fiction Chapter of mine is 'Argonauts in space', with all the myth and legends that brings. Many nautical terms are applied to space in 40K, such as the 'Imperial Navy' and 'marine'. Therefore the name 'Aquamarine' name does not refer to 'water' but 'space' and perhaps more specifically all space including the warp (which many describe as 'fluid'). The literal interpretation of 'aquamarine' is a rather matter of fact utilitarian 'space marine' or 'warp marine'. This nondescript chapter name of Aquamarine is not really used between the Battle Brothers, as they take their name from their ship. For example: the Marines of the Nautilus class Battle Barge Argos are referred to as Argonauts. 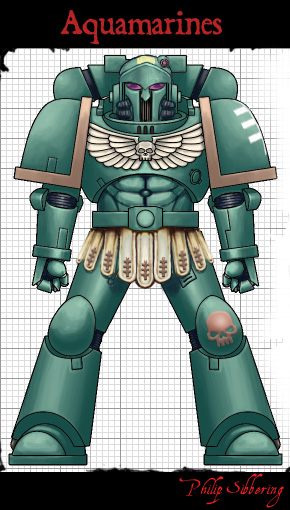 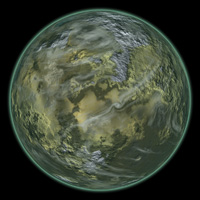 Thessaly: is a single world orbiting a gas giant within a nebular. It has no moon. A hot misty world of silicate deserts where it never rains. An old world with a near solid core. Huge sunken cities are built around deep 'oasis', titanic shafts cut into the crust reaching deep into the planet's bowls, at the bottom water collects. The habs surround the walls of the shaft, built into the rock. Each oasis is a city state (the whole of Thessaly is like out ancient middle east, except that here they really are all that there is of the known world!)

The Aquamarines are a successor chapter of the Ultramarines. Their recruits are drawn from the harsh world of Thessaly. It was founded to guard the Dark Star archaeotech platform found on the edge of the Thessaly solar system.

Symbol: A White Samekh (Ultramarines letter tie in) on turquoise base.

The Aquamarines are from the world of Thessaly, but are currently lost on the Atlantis Dark Star. It was renamed 'Atlantis' due to its lost status by Inquisitor Lord Contemptra Wargg, who has sought it for more than 100 years. Officially 'Atlantis' is a world that is said to be lost in the great bureaucracy of Terra.

It is thought to be near Tau space, and the Aquamarines have become adept Tau hunters, and due to the location of their home world have been very secretive about it's location.

Each company is run much as a Spartan style city state, supported by the populations of other city states. The Chapter Master is name Atlas.

Tactics in open warfare revolved around a modification of the phalanx but instead of spears combat accessories in close and Bolters are used at range. The idea is that the armour of the marine is the new shield, and the bolt rounds extend the reach of the spear tips.

Three assault companies are known as the Spartans (who gave rise to the Sons of Sparta Chapter). These 300 warriors are some of the finest assault troops in the Imperium.

In the myth, the Argonauts were a band of heroes who accompanied Jason to Colchis in his quest to find the Golden Fleece. In 40K Colchis is the name of the home world of the traitorous Space Marine Chapter of Word Bearers, and their Primarch, Lorgar, had golden skin. The Primarch is now a Daemon Prince and is rumoured to reside on the daemon world Sicarus. 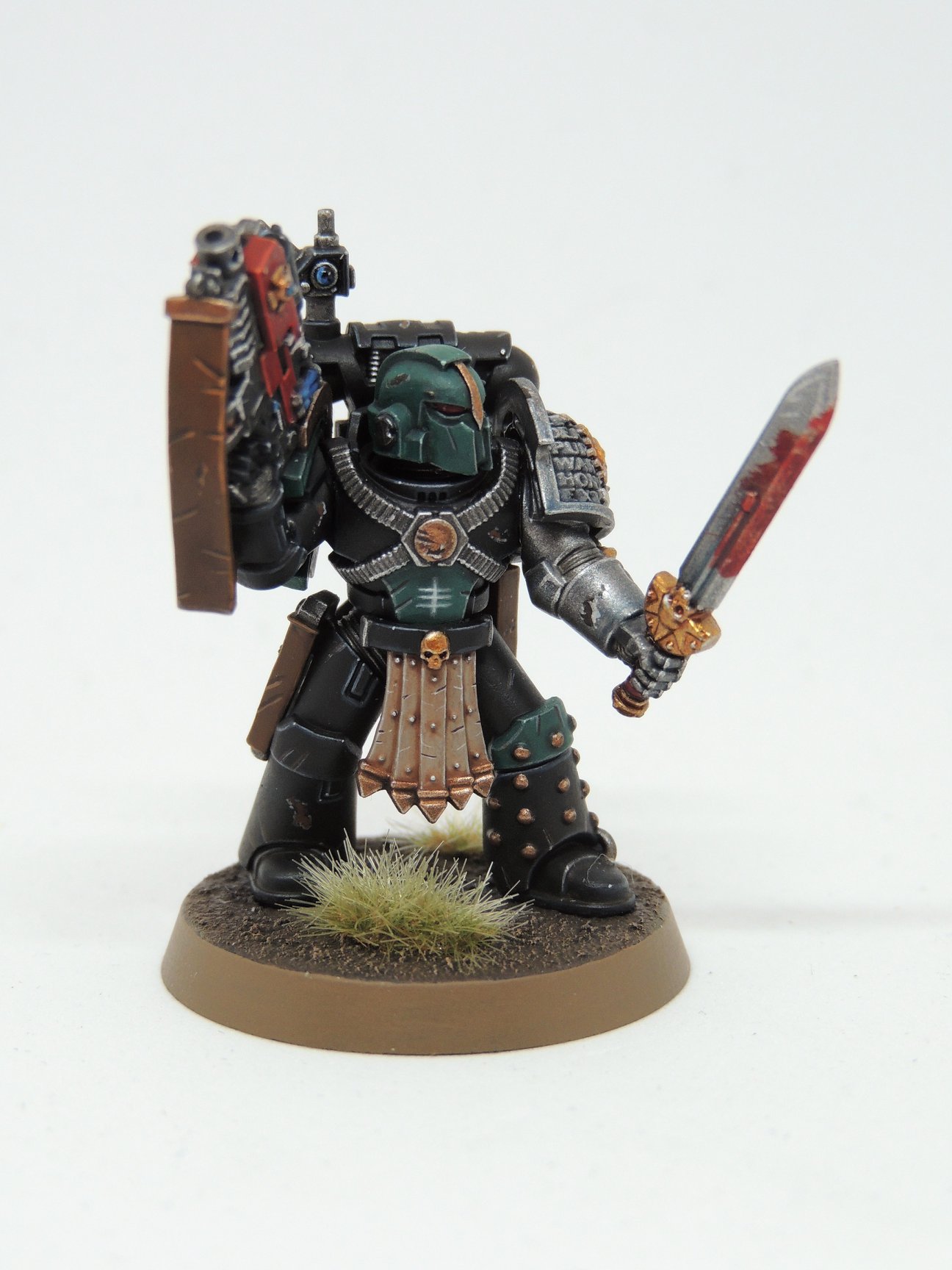 The Aquamarines are an Ultramarine successors. Chapter Master Atlas originally served as an Ultramarine before taking command of this newly founded chapter. As such he has inherited some long standing traits, traditions and grudges. One grudge is the blood feud between his old Ultramarine warrior lodge and the Word Bearers. Atlas tasked Captain Jason will hunting down Lorgar of the Word Bearers.

Veteran Captain Jason, currently serving in the Deathwatch, commands the the Nautilus class Battle Barge Argo. The members of Jason's Deathwatch kill-team (not all Aquamarines!) are referred to as Argonauts. The Argonauts are tasked by Atlas, and Ordo Xenos (with support from the Ordo Malleus, and Grey Knights) to track down Lorgar and skin him alive and bring back his golden hide. This is an impossible task (base for convoluted story?).

The first company was assigned as custodians of the first 'Dark Star' station discovered by the Imperium. A dormant relic left over from the Dark Age of Technology. It disappeared from reality with the entire chapter. After the disappearance the The Dark Star was code named 'Atlantis'.

The Dark Star contains warp portals, that open onto worlds throughout the galaxy, many of these worlds are not under Imperial control, and the Aquamarines bring the light of the Emperor to these heathen populations.

Cult of Astarte: Astarte is a female goddess on ancient terra. The warlike peoples of Thessaly had a huge problem with the idea that a man could be improved by introducing the (gene)seed of another man, or create new life without a woman, and so the Cult of Astarte developed as a social convention to try and get their head around the whole idea. In the cult the Primarch has both male and female aspects, and it is the female aspect that gives birth to the 'marine'. As such, the marines are viewed as a reincarnated second life, not a altered body. In this mythology the marines are literally the sons of god, and are considered 'demigods'.