The theme of this (fan-fiction) Chapter is based on Indian culture and mythology. The core concept of this chapter is that they have incorporated Kaos (Chaos) into their belief system and do not fear demons. A high proportion of the inhabitants are resistant to demonic influence and many are Psykers, or have highly developed spiritual senses. 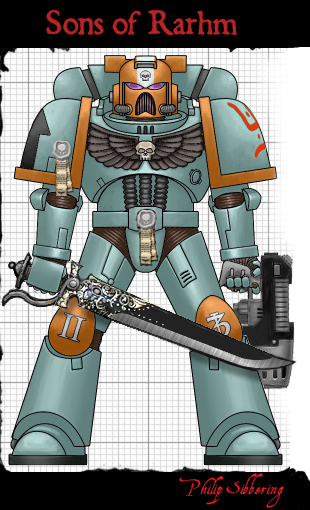 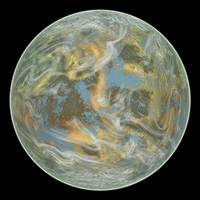 INBUS IV: (The name India /’?ndi?/ is derived from Indus, which is derived from the Old Persian word Hindu). This world falls under the ‘Paradise World’ classification. It is very much like ancient Terra, with rich jungles, tall mountains, deserts and torrential rain during the monsoon season.The people of this world are thriving and population numbers are booming but not to the point that the Adeptus Mechanicus starts building Hives.

The Sons of Rarhm are a 10th founding Chapter raised from the Paradise World of Indus IV by the Ultramarines. To the people of Indus the number 10 as great symbolic meaning – of the mortal and immortal becoming one. They see the Space Marines as avatars of the Rarhm (Emperor), the manifestation of the holy spirit of Rarhm in the earthly realm.

The Sons of Rarhm are part of an Ultramarine ‘honour guard’ tasked with protecting the population from the collapsed northern gate spewing chaotic warp energies into the world of Indus.

Notes: Index Astartes article “The Eye of the Storm”

The current commander of the Honour Guard is Captain Echion of the Patriarchs of Ulixis Chapter, a veteran leader of many centuries of service fighting the servants of the Ruinous Powers. It is unusual, though far from unheard of for an officer not of the Ultramarines Chapter to lead the company, though with the Chapter’s resources stretched by Tyranid incursions on the Eastern Rim such a situation is set to become more common.”

The standard colours of a Sons of Rarhm Marine;

The Aryan class (Aryan is derived from ‘Arya’ which means ‘noble’ in Hindi) of Indus IV view the Emperor as the Perfect Man and an avatar of Ghod (Rarhm). They see him as the saviour of mankind and destroyer of evil (Shiva angle) Unlike many an Imperial world, on Indus IV Psykers are not feared and are quite common and well integrated into the society. They form a complex network of communications and are the hub of commerce in the sector. This integration is largely down to the religious and strict caste system, and emotional control and openness. It has even been put before the high lords of Terra as a social model for other worlds with high Psyker manifestations (it was rejected, on the ground that such openness would cause a panic and fear in other world’s population and play into the hands of Kaos (Chaos)).

As such a high number of Space Marine recruits have Psyker ability, and the Chapter Master and captains are all powerful Psykers, this has put them at odds with the Sisters of Battle, who view such wanton favouritism towards Psykers as a sign of heresy. The Sons of Rarhm put this down to ignorance of their holy mission, and refuse to be cowed by superstition, just as their father (The Emperor) refused.

Trait: Fearless of Daemons: The Sons of Rarhm do not fear daemons, seeing them in scientific/ religious/ Spiritual terms as entities born of emotion in the Kaos (warp). This deep understanding of what they face removed the fear of the unknown and coupled with their iron will and self-awareness such beings have no hold over them. There number one tenant is to ‘know thyself’ and understand when they are being influenced by ‘daemons’.

Silver: This element symbolising the moon is strongly associated with psyker powers among the people of Indus. Elemental silver and silver compounds are ingested by Psykers, and many high-caste Aryans, to boost their resistance to Kaos. The silver particles form part of a ‘body ward’ and combined with meditation greatly stabilises their psionic abilities. Those who ingest silver are notable by their skin tone, one of the most startling side effects is that of Argyria which turns the skin blue-grey. When the Emperor appeared to the people of Indus during the great crusade, his skin was said to be bright blue, far deeper than any on Indus. This immediately signified him as something very special in the mind of the people of Indus, and all images of the Emperor on Indus depict him with blue skin. The 40K equivalent of Rama (the seventh Avatar of Vishnu).