This has a strong Celtic theme, and is a semi-homage to the comics of Slaine. I wanted to twist the mythology of the Celts into the background of this Chapter, and weave in plenty of chaos. 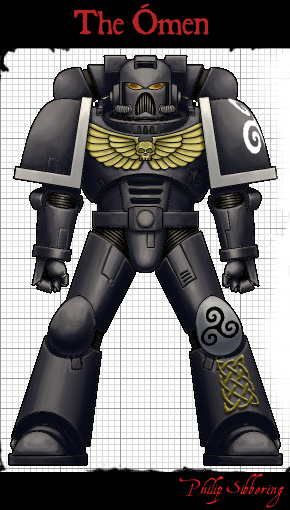 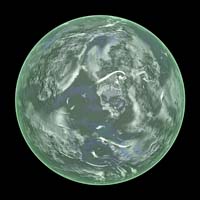 Danuvius III: A lush paradise world with an occasional Ork problem. The major land mass in the northern hemisphere and the homeland of the tribes is Pritani.

[Eldar/ Slann/ Old One semi-operational warp portal]: Far to the west upon the Isle of Ablach is a ring of ancient standing stones. Once in a blue moon a gateway opens to the otherworld, Annwn, a mythical 'plane of joy' (Slaanesh? Eldar God? Danu (shared root with Hindu mythology - link to the Sons of Rarhm)?) and the basis of many Echtrai. Often the legends tell of a hero who gets the better of the otherworldly deities though wit and guile, and often finds love (Danu? Don? Daemonettes? :p) but leaves to return home to save his tribe (Goddess has no hold!) with great weapons of power. He then unites the tribes against an great foe, wins and rules, only to fall to some foul curse in later life.

Limited rule: It is usually well known that there is a steep price to pay for romping around in the garden of eternal delights! (see 'enemies' below).

All gifts have to be returned to 'the lady' once the foe is defeated, else the land dries up and famine takes hold.

Notes: On occasion women have been the heroes and made the journey. Often Women return with healing magics and protections, but Agrona returned with the Luna Blade, perhaps the most powerful weapon ever wielded by a mortal, which she used in the 'War of Spite' against an ex-lover (marine?) and his tribe (which destroyed a continent! Now the Dead Lands/ Desert of Salt). She is revered as a goddess of shorts, of strife and war.

Successor Chapter of the Black Guard

Note on name: The name is a patronym using Ó (which denotes 'grandson'). The Ómen are considered the grandchildren of the Emperor, and although Corax is the the father, the Emperor is used because he still lives. The problem here is that no one is allowed to speak the Emperor's name so Óman (Ómen plural) was used as a stand in. All the marines have the surname Óman.

Each of the 9* tribes is represented 111 of their greatest heroes lead by their 'King' (captain). 100 represent their tribe's associated company (lodge?), with the remaining 11 (king and ten guards) being part of the command 'high company' lead by the High King elect who is also the Chapter Master. The high company and the kings are all Bards, forming the religious/ cult centre of the Chapter and laying the bonds between the various tribes (Pan-Celticism?).

The Chapter is unusual in that they do not have a fortress monastery, but instead live among their tribes as 'warrior-poets'.

*Note: One Company is missing thanks to Agrona! (?) 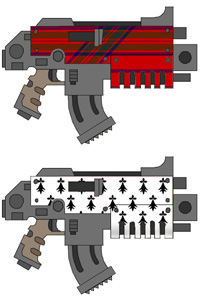 Markings: Each clan can be identified by various Tartans and patterns found on their bolters. These are woven (kevlar like) cloth bonded to the ablative armour casing, or imprinted and studded leather with metal inlay. It all depends on the tribe, and each Bolter is a unique work of art.

Bards: Both Chaplin and Librarian combined in varying proportions.

Psi-Harps: Similar in principle to the Slaanesh noise marines' axe (guitar), but instead of destructive the Psi-Harp is used to strengthen protections, create wards, banish daemons and give heart to warriors in times of peril.

The Ómen use a form of combat known as Bataireacht a stick fighting martial art used by the common folk and lords alike. The tradition weapons is made of blackthorn wood with a knot at one end filled with lead. These are used to settle disputes. The marines use and upgraded version combined with power-maul tech called a Shillelagh. These are master crafted works of art wrought with archeotech and inlaid with gold.

Orks! Ever since the earliest legends the Orks (Fomorians/ Orcnéas) have plagued this fair world. It is usual, and some speculate that it is not a coincidence, that mighty heroes of old have all found their way to the Plane of Joy just as the Ork's invasion seems unstoppable.

Not Forgotten: Not a bad way for a king to go: gets his leg over with a goddess and nips back to fight the Orks, only to die from some malady (broken heart) in later life because he can't get back to his love (I want to see my goddess: boo hoo! (Danu - 'all shall love me and despair!' :P). It is also taken that many men (and women) of the tribes have a roving eye for those from far away lands!

Weapons: The Ómen usually fight Fomorians (Orks) and being an unorthodox (non-codex) Space Marine Chapter have changed the way they fight. It has become obvious to the Ómen that Bolters run out of ammo pretty quickly when fighting a mass war against the endless horde, and so they use bolters more for defence where ammo is plentiful (often with the drum box). For taking the fight to the Orks the 'Sun Spear' is employed, a power field spear which 'burns' with a ghostly plasma blue fire. Another weapon often carried by high ranking elite is the Luna Sword taking it's name from the weapon of legend. The is a variant Archeotech power-field sword with a combined repulsors field, which literally tears an opponent apart ('their bodies ripped themselves apart to receive it').