This is a pure gothic horror chapter - and playing up the vampire aspect of the Blood Angels. I wanted some to have something that was like Dante's inferno (tie in to Chapter Master of the Blood Angels?), where insane vampires wail in lock sarcophagi. I imagine it was an attempt by the Blood Angels to cut out the worst of those afflicted with the Black Rage and deep thirst out of the chapter. In reality it is an insane asylum except there the inmates are let out to run amok! 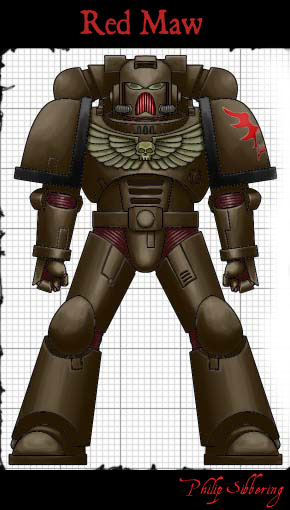 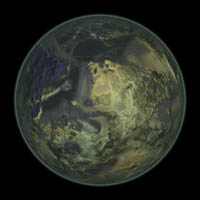 Carpathia: is an arid world with sparse vegetation and little water. Its cities are carved into the living rock of mountains, the capital is Ardeal/ Stof.

The Black Sea. Holy site. Believed to be where the souls of the dead enter the underworld, ties to the 'Black Rage' of the Blood Angel curse.

Successor Chapter of the Blood Drinkers

The Red Maw are a Blood Angel successor Chapter. Founded in M33. They stand guard over the super-massive space hulk 'Abezethibou' that orbits the Carpathian star. The hulk was formally known as Tartarus, and renamed after Chapter Master Abezethibou who's died leading an expedition into the maze like heart of the hulk to close a warp gate. It is foretold in prophecy that the gate will open and free the denizens of hell. One half of the Master's left shoulder pad, cloven in two, is a Chapter relic. The one red wing of Abezethibou.

Armour: Earthy brown and black of the mountains of their home, with a red face grill. Mrk7 and Mrk8 armours are most prevalent, and their aquila are of a greenish 'luna' rock.

Symbol: A blood red winged maw. Personal heraldry of captains may include a 'beard' of blood drops.

The Red Maw are some of the most savage assault marines known to the Imperium. They are rabid and virtually uncontrollable. Once released they will kill and kill until everything is dead, feast on the flesh of the fallen, and even trun on reach other in their madness.

The Red Maw are prone to falling to the red thirst and black rage, a legacy of the Blood Angels, and from which the Chapter derives their name (and the red grill).

*Massive scout recruitment to fulfil losses. Most of the Chapter's strength lays in 10th company and the scouts.

*Deep dungeons/ insane asylums where those fallen to the 'curse' are contained.

The are supposed to be a codex Space Marine Chapter, but once the battle is joined they quickly loose formation and self control and become rabid. What is unusual is that the seem to have a pack mentality and still work well as a team. They have a strange barking, roaring and grunting battle language of commands. Most have not actually been seduced by the black rage and it seem to be a form of mass hysteria. After battle they wail the laments of the dead, their blood curdling 'death song' before those who fell succumb to the black rage, and those who did not pass out to visions of their lord (battle happy/ drug induced hallucinations)

Curse or Blessing? The Red Maw marines see the black rage not as a curse but as a blessing! They believe it is the first enlightenment of Sanguinius, and that overcoming the Black Rage delivers the marine to a higher plane of existence and closer to their beloved lord. They see it as following in the footsteps of the 'first apostle' Calistarius who was reborn as Mephiston Lord of Death, of the most holy Blood Angels Chapter. The call this the 'blessing of blood'.

Hundreds of 'touched' marines are surgically bound into medical sarcophagi. Even when pumped full with massive doses of potent sedatives they still rant and rave day and night, gnashing at their bonds and screaming their lords name. The corridors of the pit are full with the howls of the tormented, and as you descend through the rings (think Dante's inferno) the voices become more and more demonic. Hordes of servitor scribes protected with psi-wards faithfully record all that is said, as every now and then one of The Bound, one of the howling furies of madness, becomes momentarily lucid and it is believed they speak the future.

None have recovered form the Black Rage yet...

At the ninth ring the sarcophagi are eerily silent, for the marines interred here scream a 'counter noise', harmonised with those above. It is believed that these marines are near ascension, and are known as the 'heralds of god'. The ninth inferno is regarded as the most holy place to the Red Maw marines, for they believed an avatar of Sanguinius will raise form one of the blood drenched Sarcophagi.