The theme of this (fan-fiction) Chapter is based on Japanese culture and mythology. In essence they are 'Samurai in Space' in the same way Eldar are 'Elves in Space', so there will be a fair bit of twisting of preconceived ideas. I've tried to get a bit of flavour into the chapter, and reimaged the Japanese culture - I want it to be fun for a Japanese fan too! I suppose I hope it will have a similar effect to how European culture was reimaged in the old PS2 game 'Vagrant Story'. Well there is only one way to find out... 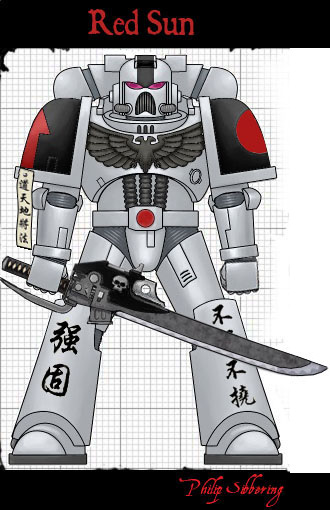 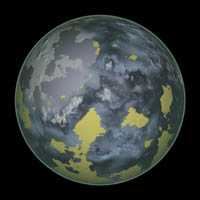 YAMATO: The home world of the Red Suns is a Hive world in the true sense; covered in vast Ecopolis made up of thousands of Ecorium super-plexs centred around gravity-funnel spires reaching into the sky. In orbits are the titanic shipyards that maintain the chapters fleet of ships.

Large areas of the world are radioactive deserts of sand, sulphur and ash, wastelands of old hives burnt to nothing long ago ins a half forgotten war with the Orks. Scorched earth to kill the spores.

Successor Chapter of the Blood Angels

The Red Suns are a fourth (4th) founding chapter. In the earliest days of the chapter's history many of the citizens of Yamanto considered the 4th founding to be an ill omen as '4' in their local language is pronounced shi, which is a homophone for death. It was only later that the truth of the Blood Angel's heritage was to manifest and the omen fully understood. On the eve of an Ork invasion hundreds of marines fell into a maddening rage, cutting their flesh, and scribing their armour with blooded pictograms. As the Greenskin Horde plunged from the heavens in the twilight hours, smashing into the Hives of Yamanto, the true power of the marines was unleashed for all to see. In the massacre that followed the marine veteran Akuma slaughtered over 200 Orks, 100 to the left, 100 to the right, and the mighty Warboss Kha-Gan in violent orgy of destruction before succumbing to the fires burning within his blood. It is said his countenance glowed with a halo of gold, his face red and distorted with rage, his armour was slick with black oil blood that fell like rain from his hewing strokes. A true 'Blood Angel' touched by Sanguinius himself, but alas such glorious power could not be contained within a mortal man, even a marine, and death was inevitable. Yet the people of Yamanto did not shy away from this terrible power - they embraced their Angels as giving all to save their world. In time their culture changed and 'death' has become 'sacrifice', and at the shrine of Sanguinius many weep for their lost sons during the ritual of blood.

Symbol: Red dot on a black background, representing the giant red sun of Yamato against the void, and a single blood drop of purity in the warp.

The home world of Yamato is home to the massive Hive complexes, and the Yaddo Alpha hive complex.

The Red Suns favour the close combat of Hive Warfare and excel in such environments. Although they may seem reckless in their head long charge this is not the case as they have eyes and ears few notice...

Maneki Neko (Bakeneko): To gather information within the great hives the first Tech-Marines created thousands of cyber-cats to be the 'eyes and ears' of the chapter, using a variant of cyber-cherub archaeotech. The cyber-cats have stealth abilities and many hivers who claim to have seen them say they only noticed when the cat blinked its flame red eyes before vanishing into thin air. It is taken as a warning, and due to their evasive nature hivers call them 'ghost cats'. It is a popular superstition that the ghost-cats work for the chapter and watch for sinners. However, there are stories where the ghost-cats have helped loyal citizens to escape the nastier elements of the hive gangs. Many times a lost traveller has seen a glimpse of a 'beckoning cat' - but blink: and it's gone. Later they learn they narrowly escaped a clutches of rampaging gang.

Maneki Neko counts as a 'cyber-cherub', but they do not have the ability to fly and instead they have stealth abilities. They confer blesses such as extra saving throws for heroes, and can locate enemy infiltrators. The use of the ghost-cats allows the Red Suns to be aware of booby-traps in hives and built up areas, which in turn allows them to avoid such dangers and charge in like 'mad things' to overwhelm the enemy at their weakest point.

The Red Suns believe that the power of Sanguinius is absolute, and that such power gifted to a man, even a marine, will corrupt absolutely. They embrace this destiny, and prey that when called upon to wield such power they will do so for the good of their chapter and humanity. They know the the blessing of Sanguinius is a fleeting gift. To try and hold onto such incredible power is a temptation of chaos, and as such the greatest betrayal of their Primarch who gave everything to defeat chaos. The blessed will use what power Sanguinius has granted for the purpose they believe it was granted: to smite all the enemies before them, even ones beyond their normal ability to defeat. They will give their all to achieve this goal. They never, ever, hold any power back. This use of such concentrated power is always fatal, but death is merely the final test of honour: Sacrifice, as their beloved angel sacrificed all.

The Red Suns, unlike a lot of Blood Angel successors, do not see the Black Rage as a curse. Instead they see it as the manifestation of their primarch's awesome power within an imperfect vessel of the marine. They do not hide away their brothers maddened by visions of the angel, they admire them for their purity, focus, and furious desire to kill everything impure. This does put all other marines in danger, but strict etiquette and specific honour rituals calm the blessed, often to the point of being able to talk (though they will not listen). Any break with such observances, will send the blessed into a outrageous kill frenzy of destruction with such single mindlessness of quick kills and perfect cuts, that many marines could die before the blessed were to pass.

The Death Company can usually be found in 'zen zones' like the 'garden of solitude', or the 'sanctuary of still waters' if on a ship, and are only ever disturbed by the single toll of the great war bell. Once the bell tolls...

There are no successors of the Red Suns; the death toll of Sanguinius' blessings is too great. There is a renegade faction called the 'Ronin 44', on a 'blood quest', but they are thought to be dead for no marine could survive what they charged into...