I was holding off on writing this, the last part of the series, until I had heard back from the Mental Health Team, as I figure it would be prudent to include their input in sorting myself out. After speaking with them, three months later, they confirmed the other day (2020-07-24) that the team had accepted my referral. Unfortunately, there is a 40-month waiting list, so I will not know if I have ADHD or not for 3.3 years! It's kind of ironic asking a possible ADHD suffer, not know for our patience, to wait so long. It made me laugh when I read the letter, so I'll look on the funny side. I'd imagine they have bigger fish to dry with Covid-19. Anyway, this puts a bit of a kibosh on my whole plan to include the professionals. I cannot wait around for three years twiddling my thumbs. I cannot afford to go private, as I'm on universal credit, and getting a regular job is hampered by my ADHD (that I don't know if I have or not). So any solution is going to be all down to me (there again when isn't it?). I have to dig myself out of the hole I find myself in and pull myself up by the bootstraps.

So, time to yank on those bootstraps and see what happens. If what I have figured out in these blog posts is true, then I have three areas I need to sum up and get clear in my head; why I failed, the type of job I really want, and what is my mission?

END_OF_DOCUMENT_TOKEN_TO_BE_REPLACED

It seems my resistance to doing artwork is far deeper than I first thought. There is still a burning passion for art within, but it's not unleashed, and I do not know how to unleash it. I can write for hours, and I never have writer's block. I have hundreds of essays for Sciror. I feel compelled to write, to express my ideas, but it never translates to art. Notwithstanding, my Sciror writings are not translating into articles either. Something is wrong with my process or my aim.

I took my original portfolio, to games day '97. After blagging my way past security to get into the VIP area, I met John Blanche. A good man. He was kind enough to look through my work, and while the pair of us chatting away, he said (and I paraphrase) that I was "not an illustrator but an artist". I didn't think anything of it at the time, but the words stuck in my head. These words came back to haunt me, and later they led to an epiphany, which I'll get to in a bit. Getting back to the story, He asked me what job I wanted, and I said 'his': to have free reign to paint large scale 40K posters. He smiled at my ambition (I assumed he smiled at that), but that job was already taken, and the studio was full. He asked if I could be an illustrator and pointed out the restrictions. Again, the whole artist-illustrator thing went over my head. I was so wrapped up in working for GW I was like the little engine that could; I think I can, I know I can! (Turns out: not so much). Mr Blanche tried to warn me that I was not an illustrator, but I didn't know any better, and I couldn't imagine any other options. I was a serious 40K fanboi, and I was all in! With my promise to work hard at illustration, John pointed me to the new start-up publishing imprint of GW, and to tell them he sent me, and that's how I got my foot in the door with the Black Library.

END_OF_DOCUMENT_TOKEN_TO_BE_REPLACED

This is the first part of an article which runs my issues with creating art. I detail my confusion about the difference between being an artist and an illustrator, there is a bit of pop psychology, and my plans to get back on track. It is a tad long and waffly, and that's after I've drastically cut it down to a 'mere' three parts! If you are not an artist or find pop psychology interesting, there is not much for you here, but, if what I write here is correct then maybe something creative will come of it in the future? Time will tell...

Do you ever wonder why you don't do the things you know you should do? You would have thought that getting back into art would be easy; start practising again, get in the flow, produce a few pieces, and then contact games companies for work. Easy eh? I've done it before, so what's the problem? Well, it used to be easy. Now, not so much. It's not that I don't want to; so why am I not doing it?

When getting to grips with something complex, as your psyche, it's probably easier to think in analogies. At least in the early stages. We live in stories; it's how we navigate and orientate ourselves in the world. Once we have a clear narrative of the issue, it's much easier to figure a solution. To that end, I think of my artistic instincts as 'an engine', that is always ticking along in the background, and I rave it up when you want to do some work. Except my engine won't rev 🙁

Like most problems to do with modern engines, it probably the electrics: the wiring. So, let's break open my brain schematics and take a look under the bonnet (hood for my American cousins). Time to reprogram my Electronic Engine Management System, plug in some ideas and see if we can get a connection—time to find a spark.

My wiring problem maybe ADHD, masked for years due to the pressure of my role as a carer. Though nothing is certain, the mental health team will be getting back to me some time in the future after we had a little chat. In the meantime, I've been looking to overcome my barriers to producing art, and counter any potential ADHD to boot (or whatever it turns out to be), I've been watching YouTube videos on ADHD and motivation/ focus. The best ones seem to be a rehash of stoicism (habits makes the man) with a few pointless tricks thrown in. However, one video struck me like a bolt of lightning; they suggested using artwork that ties into your goals to inspire, artwork that means something to you. Nothing new there. Then they suggested creating that artwork. I thought 'I create artwork', and I shrugged my shoulders as if it was nothing, and then; BANG! For some reason, I didn't think of my Black Library art; I instantly thought of my old (really old, like 20-year-old) 'grand project' for 40K. I felt a sudden compulsion to gaze upon my early works, back to where it all started, my first portfolio that was rejected but got my foot in the door with the Black Library. I wanted to look with fresh eyes at works I'd not seen in decades. Spark found.

END_OF_DOCUMENT_TOKEN_TO_BE_REPLACED

I have been messing about with the Org concepts some more. I came up with one I liked in a doodle while on the telephone. Funny how inspiration strikes when you are not really trying! I scanned the scrap of paper into Photoshop and worked it up. The Orgs are the Sciror version of Orcs, but I wanted them to be even meaner looking (if that's possible), a mix between 40K's Orks, rage zombies (from 28 days), and a dash of crocodile. Notable differences are the lack of lips (I may play up the shark teeth angle a bit more in later versions), the skeletal nose, and rounded ears. 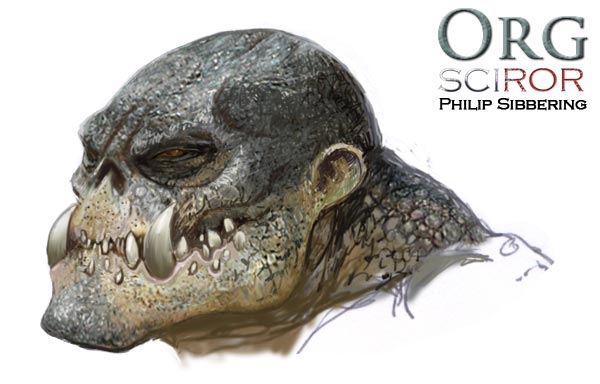 I've added a gallery for images for Galerie Daniel Maghen. The first image is my Draklodyte commissioned by Oliver. It's based on the troll/ troglodyte I posted up in the WHF section of my site. I was asked to stick some wings on it, which I did, and the Draklodyte was born!

This is a pretty powerful beastie, on thick arms it bounds along like a Gorilla, and able to scale mountainous terrain with ease. The wings are a bit small for the sheer mass which affects it's modus operadi.

I imagine that the Draklodyte climbs up onto cliff tops and 'dive bombs' its victims. Swooping down at great speed: straight into the back of the party! Bowling them over like skittles - Strike! It then turns on them, butts them down, sits on their chests and devours their flailing hands. It has a very tough hide and regenerative powers and is a real pig to kill, but you are unlikely to get the chance as it employs the 'hit and run' tactic. As soon as it's eaten our arms it's out of there! It will not stand and fight - ever.

It's much the same as the troglodyte this concept is based on. As such I think they are smart and cunning, they tend to be a bit shy, and only attack when they have surprise.

Perhaps the drakes have wings, and the troglodyte is the female? She nests in the depths of dwarf strongholds?

The published image can be found in the L'univers des Dragons book published by Galerie Daniel Maghen.