Trolls in the Dark

There are many beasts that bare the 'troll' name in the myths of the Empire, yet they are not all the same. The origins of the word according to the great scholars of renown is in fact a corruption of a Dwarf word. It seems the word is not even related to a particular species or beast, but denotes a particularly insidious, tough and invasive enemy that is hard to get rid off. It seems to originally have been used for Dwarf families that caused trouble (Chaos/ Kaos Dwarfs), but was later used to denote a particular type of beast that inhabited the lower mine levels.

This is my version of a Troglodyte, also known as a Mine Troll or Grung Troll in Dwafish though Dwarfs usually just call them Trolls (as most Dwarfs are in a mine at the time). Mine Trolls are foul beasts encountered by Dwarfs in their deeper mines of the World's Edge Mountains. 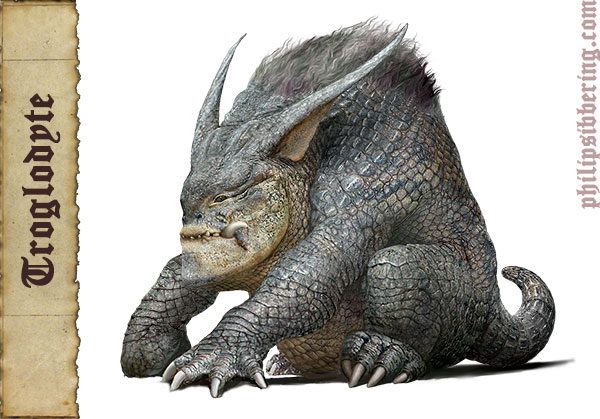 Mine Trolls are adapt at moving through Dwarf made tunnels as they are about the size of a mine cart and just as heavy as one loaded with ore. They have thick powerful heavily armoured forearms and iron like skulls and run with alarming speed is the manner of a silver back Gorilla. Their strength is legendary among the Dwarfs, it is said a silver back can bend a bar of mythril (?) which as any sane person knows is impossible. This has lead many to believe that the trolls are not all they seem, and are powered by hidden magics (indeed some have noted that scales seem to bare arcane runes formed by the ridges!). This would be put down to silly stories if it wasn't for the history.

The young of these trolls are, believe it or not, incredibly cute. The 'pups' or 'trogs' have large black eyes, long floppy ears and soft downy fur (think pikachu). They are sensitive to light in their early years and whimper in bright light, and lay their ears flat. They were brought back from the ash wastes as gifts in a time before the 'Koas Dwarf' families. This was a time before the war. The little bundles of joy soon transformed into the monsters you see in the illustration above, yet they still retain the 'cute' features that to Dwarf eyes are so adorable. Dwarf children always think they are cute, and those who owned a pup often still see their beloved pet in the eyes of the monster. This is often a fatal mistake. A mixture of damn cute but with a spiteful and mischievous soul, coupled with a taste for Dwarf child flesh, the 'Trog' has cause untold misery to many Dwarf families by devouring children (all very Brothers Grimm and Grimm's Fairy Tales). It is for these reason and more, that the trogs are the 'bane of the dwarfs', the 'stealers of joy', the 'nemesis beneath our feet' and the 'watchers within the dark' (where the troglodyte name comes from). I can not over empathise how much Dwarf hate trogs, while at the same time being fascinated with them.

These Trolls are known by many names;

Cave Troll – On the eastern side they are found in caves.

Boggieman – variant (original?) of Bogeyman used by those who have seen them in wallowing in bogs, Dwarf settlements.

When running a troll remember that is does not want to drive off the PCs, it is not protecting it's territory, it is hunting. When a party encounters a troll it will not be a straight up fight. Trolls have a particular character, and trolls can be crafty.

The Mine Troll's favourite tactic is to charge down a tunnel at full pelt and slam into their prey. No Dwarf is fast enough to outrun a Mine Troll, and seeing as Mine Trolls often take up the whole tunnel dodging isn't really an option either. When encountering a Mine Troll a Dwarf has no choice but to stand and fight, and Mine Trolls are cunning and will ambush Dwarfs at he end of long tunnels, often catch the Dwarfs back while they are trailing overloaded mine carts picking up ore drops, as the cart blocks them from escaping.

Mine trolls will not engage the party in the open if it can help it, and avoids large caverns and halls.

Even if the Dwarf kills the Mine Troll in a single blow with a magic hammer the sheer momentum of their charge ploughs their dead weight body into the Dwarf, often killing the Dwarf in the impact or pinning them under it's immense weight like a cork in a bottle. It is for this reason that these Trolls which are referred to in the Slayer oath, as unless you have a magic weapon in hand when facing off one of these beasts , it means your doom. To the Dwarfs this is seen as a fair trade and eminently sensible, the Slayer dies and takes a Mine Troll with them, sacrificing themselves for the good of the all Dwarfs, and off coarse, the magic weapons are easy to recover by the Slayer's clan as they never left the Stronghold (very sensible).

Once run down and trampled, the Mine Troll sits on the Dwarf and starts eating them, most often the Mine Troll will first eat the Dwarf's flailing hands and arms crunching through thick Dwarf bone with ease, then the fleshy legs. It has been know for Mine Trolls to leave a Dwarf without arms or legs, and due to the tough Dwarf constitution for the Dwarf to survive. This is a very unfortunate and humiliating situation for a Dwarf and they will ask to be slain even through it brings shame unto their clan.

For this reason Dwarfs hate Mine Trolls with a passion, and it is believed in popular Empire myth to be the reason Dwarfs experimented with exotic weapons which lead to the manufacture of firearms.

Mine Trolls have a mean temperament and do not like to be disturbed, and are very sensitive to noise as they have very large 'horn ears'. However they are not susceptible to loud noises and being defended as they seem to be able to close their ears at the base. Dwarfs often have trouble when the Mine Trolls hibernate.

Though most Mine Trolls encountered by the Dwarfs are solitary lone males, there has been reports of groups on the eastern side of the Worlds Edge mountains, where the Mine Trolls apparently spend much time in mud wallows and swimming! The groups are headed up by a particularly large male who will drive of all other males from his pride. Exceptionally massive Mine Trolls have manes of black fur, know as fur backs, and the biggest fur backs have silver fur and are known as silver backs. It is the males driven from the pride that seek shelter in the Dwarf mines.

This are the stats for an immature male.

Criticals to arms and legs will never kill, and a killing blow and death result means the arm is ‘dead’ not the troll and all further hit to the area are ignored (and no bleeding tests). If the troll survives combat and escapes the length of the arm or leg below the ‘killing’ or maiming injury with shrivel up over the next week and fall off, revealing a new growth stump that will regrow over the next couple of months. Severed limbs take longer to regrow, usually by another month.

Criticals to the head or body that kill will affect the Troll as normal, and the Troll will die. Maiming results where the Troll lives and can still eat means they can make a complete recovery over the coming months.

Tactics: The Trog will charge one person, and if it hits knock the person to the ground (unless they are large too). Once knocked to the ground it will grapple and try and pin the victim, if successful is will then eat the person alive! (auto criticals to arms first). If there is more than one victim the Trog will not grapple but disengage and run away!
Armour: Heavy natural armour similar to crocodile skin only thicker.
Armour Points: Three points: Arms/ Legs/ Body - Six points to the Head.
Weapons: Natural claws, but like to wrestle!