Since writing about c-blocks back in 2004 on Anargo (which drove Kage nuts 😛 ) and then over on the Black Library forums (which eventually got me banned for a bit, and brought in the orange disclaimer), and a few other places 😀 , the world has moved on. The idea I developed into the Ecorium is starting to come about in the real world, so now I want to push the idea to get ahead of reality once more. Below is my draft of the logical reasons and solutions for each stage of Ecorium developed reaching forward from the present day, through VotNF, all the way to Sciror. These ideas will be blended into the final timeline of the setting later on, when I have the dates sorted, though we have the first date;

The first 'Ecroium' turns up in 2013 in Korea, designed by Samoo Architects & Engineers in collaboration with Grimshaw Architects, and made public around 2010. Nothing to do with me and the name is probably a coincidence (unless someone at British Grimshaw Architects is a massive 40K fan, and that fact the name has 'grim' in it makes me wonder if there is a 40K connection?). However, I now hereby retroactively claim that as part of the first stage in the Ecorium timeline. By serendipity, the Korean Ecorium is based on eco-domes and has research facilities (but still lacks work and living space). So we can fold this into VotNF as stage one, develop the later sages to get us off-world then fold the VotNF timeline into Sciror, then fold the completed concepts into Philhammer. All part of the Philverse concept. So, for Visions of the Near Future;

Bio-domes of the Edan project, combining research facilities with an artificial ecosystem. The first appearance of the word 'Ecorium' appears on a rabid fanbois website in 2007, the first actual building bearing the name 'Ecorium' being built by Samoo in South Korea: Ecorium of the National Ecological Institute. The term develops over time to include 'work' rather than just 'research' with the development of peripheral support green businesses developed in conjunction with the eco-research and resulting product tested within the bio-domes. However, it is a while before we have non-related businesses inside bio-domes. 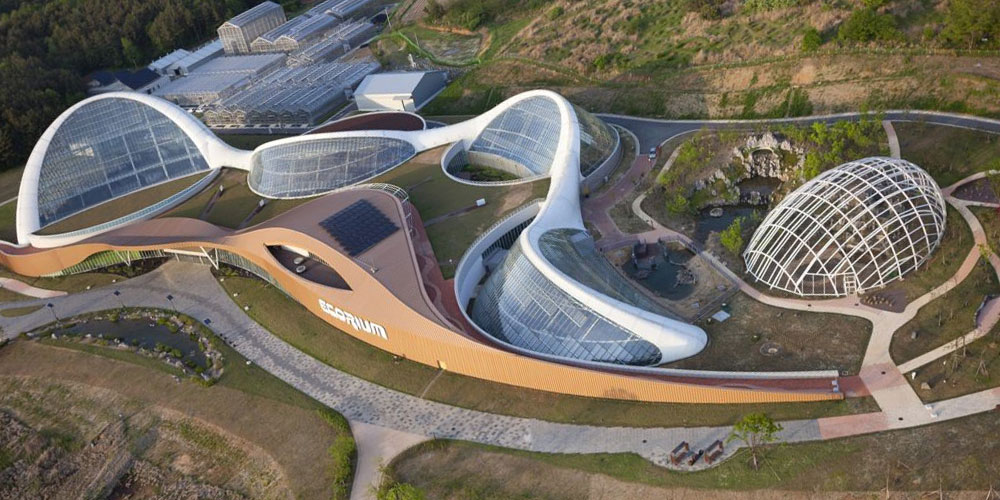 Britain builds all over the green belt using the ECORR (Eco Construction Over Road and Rail) housing concept. Land that receives sun and rain is classified under a new eco-development guideline as 'premium land' as it can sustain life, acts as a carbon sink, and has to be preserved at all costs. This concept is combined with a movement to fight back against the old architectural paradigm of building residential and commercial property by the side of the road. A rejection of city planning that is not holistic, and instead seeks to create spaces where people want to live. Though many do not know they want ECORR until they see it. However, when they do see it, it leads to a rejection of the soul-destroying concrete jungles of modernist and collectivist 'European' thinking. All roads and rail systems are multilevel and are covered over with habitable space. Living space is moved to the outer layer, the 'skin', which all have roof gardens. Yep, everyone in an ECORR gains a garden built on the roof of the hab below, and their hab-unit is soundproofed. From a satellite photo, all you see is green space of roof gardens, with parks between ECORR blocks. A green and pleasant land once more. A place of tranquillity in a bustling, hyper-paced, modern world. 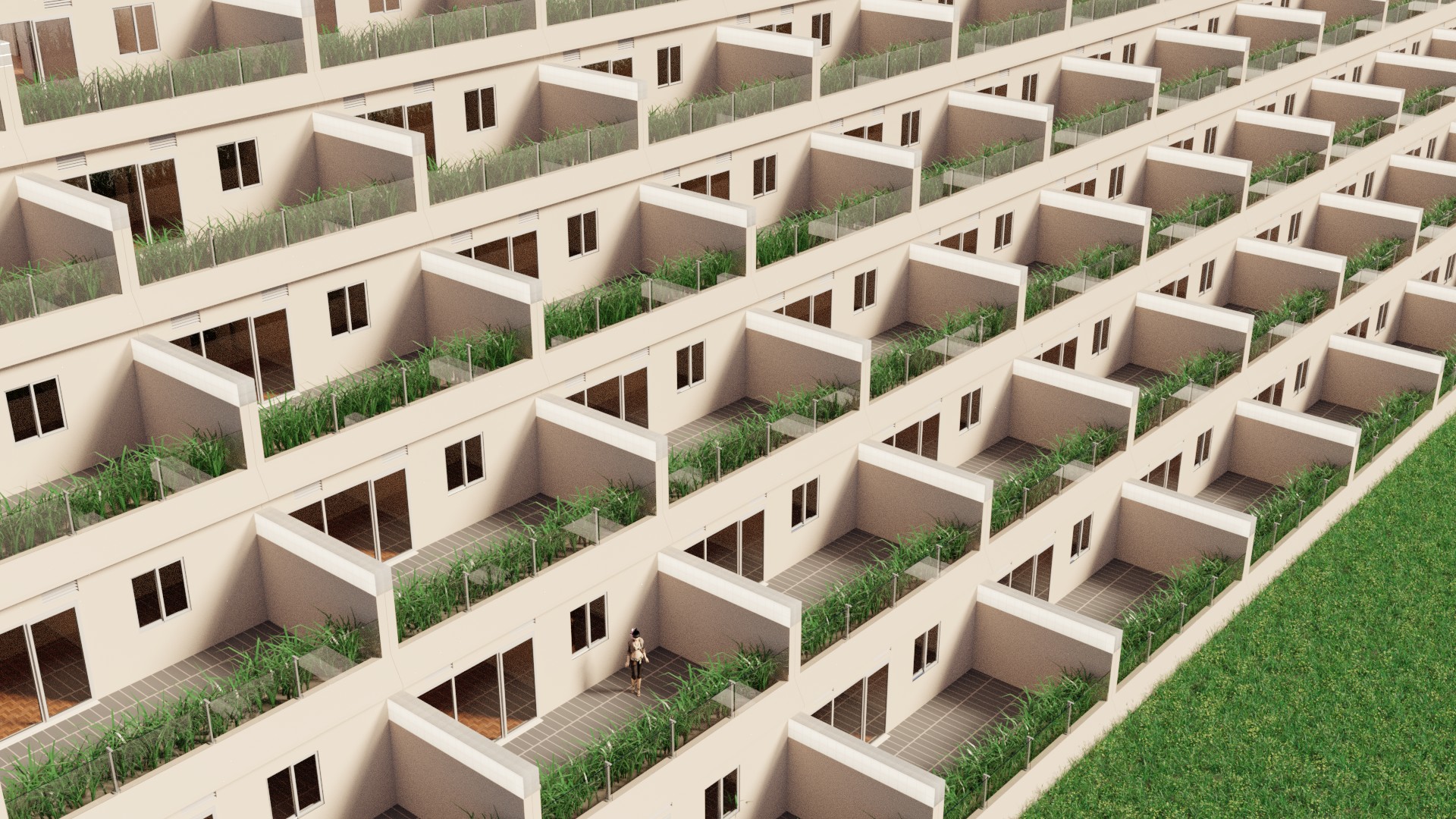 Inside the ECORR is a hive of activity, and contains all the commercial space, co-working spaces, offices, entertainment, gym and other facilities, you'll ever need, all with links to the hidden inner road and transport networks. Co-working spaces and work from home means work comes to you, rather than you travelling to the job. On-site jobs, such as maintenance of an automated factory, is done by remote drone. A worker goes to a co-working space and 'remotes in'. As time progresses these drones take over trivial tasks and only require oversight (guess what those drones are going to turn into?)

Stage one and two are folded into each other. The first true Ecorium are created in the latter half of the 21st century: bio-dome with work and living space combined. (I am not aware of an example as yet on the planet, but it must be coming!). The first examples are built in the Gulf states as they are fantastically expensive. These Ecorium are the brute force terraforming of Earth's desert. Massive drive for self-sufficiency and water capture and recycling. No expense is spared to create a 'green and pleasant land' in the desert. They start out as climate controlled ecotourist attractions at first, but develop into standard housing for the Gulf states. 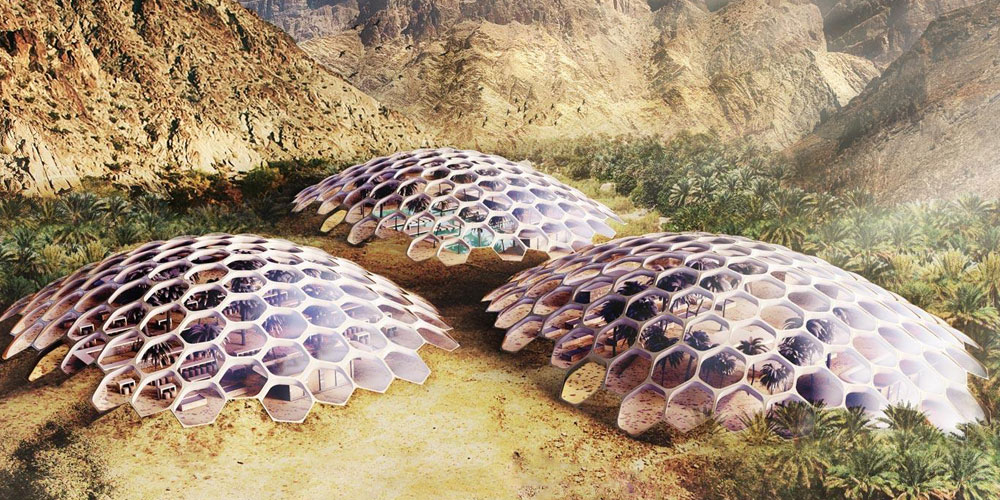 The introduction of artificial light and warehouse farming into the Ecroium equation for countries in the far northern hemisphere, where there is a lack of light during the winter months. These S4 blocks are built in Scandinavian countries and the Arctic. Gardens are not required as they get snowed over, and biodomes are pointless for the same reason. These environmental considerations lead to the utilitarian C-block I designed, and banged on about, back in 2004. (we all know how the Scandos love clean, utilitarian design! It's like the IKEA of environment building). To make it work the clever Scandinavians steal the ravings of a madman found on the Internet Archive and develop the rack-farm system 😛 These rack-farms is structured like a server-farm, except the 'blades' are trays full of plants, or bio-soup, grown under LED and later 'sunlight' emission polymer paints. Sunlight paints are used for all lighting, and linked to a standardised central day/night cycle (with override) which cures SAD (Seasonal Affective Disorder) and vitamin D deficiency. 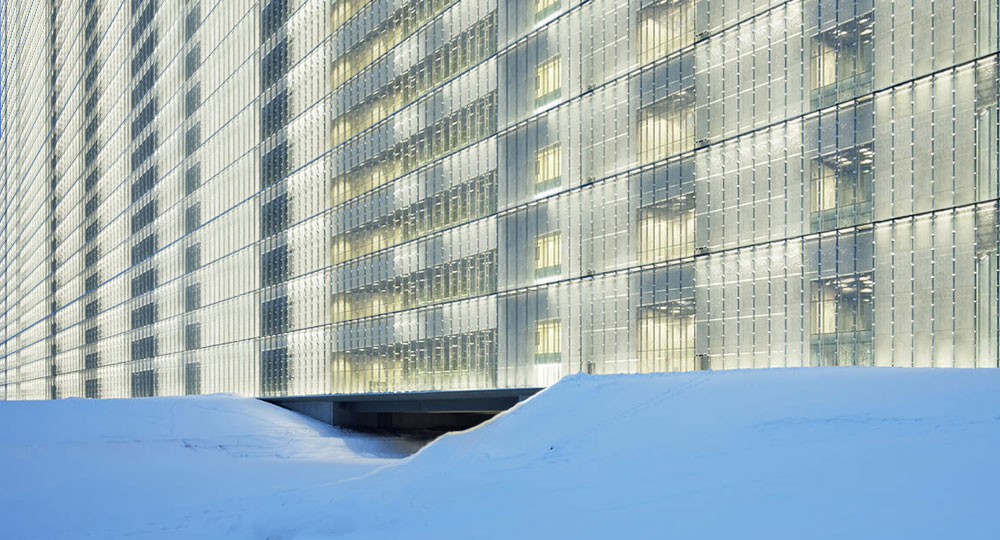 Usually a glass façade buildings, with the outer windowed areas being hab-units, and the inner core of rack-farms, and IT servers. The inner core generates heat to warm the building.

The stage four C-Blocks are built underground to protect from nuclear attack. Subterranean, and miles below the surface, all interconnected with a (British style) tube system constructed within the grid of the K-Block (kilo-block as it is 1km square). Each C-Block is a standardised 300m cube. This military specification becomes the standard for civilian habitats moving past the 22nd century. Where these complexes are built: the surface returns to mother nature. 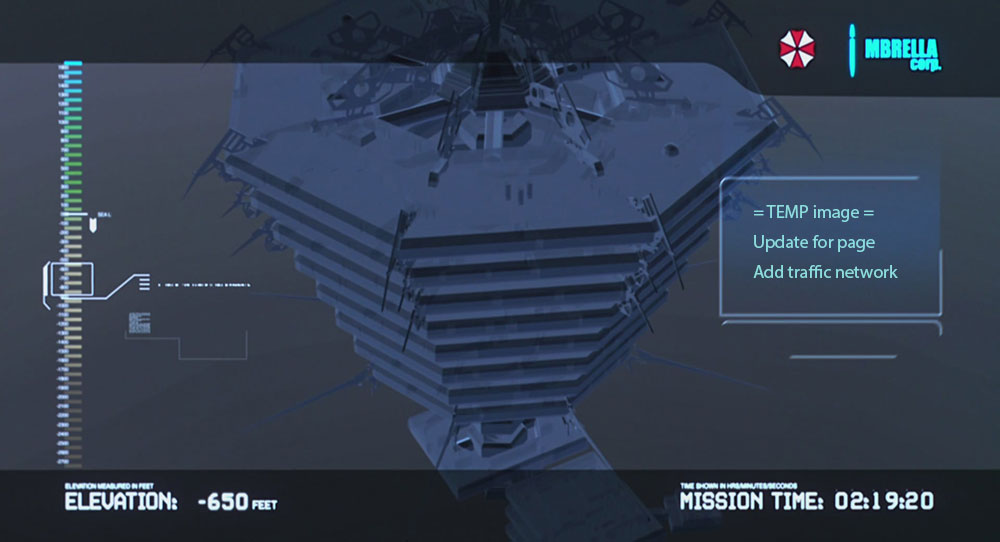 hmm, this probably needs a underground schematic for the final page, like the umbrella corp.

Nuke proof bunkers have long tunnel entrances with right angles to reduce the force of impact on heavy blast doors. However, these blast doors are not 'nuke proof', even the ridiculously thick doors of Cheyenne Mountain complex would not stop a direct hit. This was solved with the 'a tube train on a track' system that completely fills the entrance tunnel. The train is constructed to relatively tight tolerances, with clamp seals, and the carriages are filled with sand to absorb energy. After a nuke strike, the inhabitants do not come out (as the entrances would be known to the enemy, and leaving would mean they are sitting ducks as they exited). Instead, they stay put... for years. Any counter-strike is nuke based, and ground forces are repelled with remote-controlled drones, or illegal sentient killing machines (SKM) developed by the corporations black-ops. When, and if the war is won, the inhabitance can dig their way out, through prepared sand filled tunnels. However, most do not go to the surface unless they have to for work, and then most prefer to run around the surface in a drone.

Seal it up and transport it off world. Brute force terraforming with C-Blocks built by sentient machines (pre-cursor of the Artiloids) on distant worlds. This is where VotNF ends, and Sciror begins.