This is a re-image of the Rainbow Warriors chapter that first appeared in Rogue Trader. The Chapter was never really developed any further by Games Workshop. Many fans seemed to have written off the Rainbow Warriors as a in-joke about the Greenpeace's ship, but the origins of the ' Rainbow Warriors' (and where Greenpeace lifted the name) is based on Native American (Hopi) prophecy. I thought it would provide a great source of inspiration for a Space Marine Chapter, and perhaps bring to light an interesting philosophy often overlooked. It went off the rails a bit and added Aztec and Norse myth into the pot. 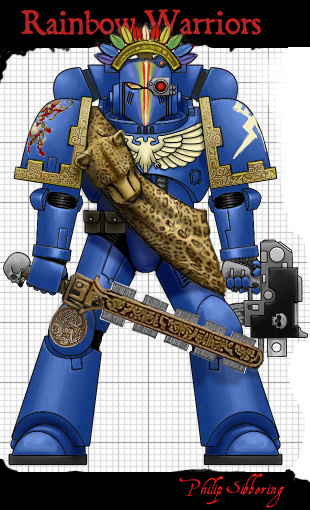 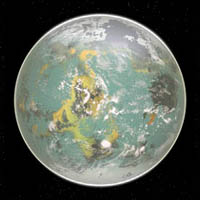 Tonaltzinthi III The Rainbow Warriors home world, also know as Tonal III, with the main continent Aztlán. The reference to the seven caves in their ancestry legend refers to seven generation ships that brought the original settlers to Tonal III during the Dark Age of Technology.

The main cities are giant stepped pyramid shaped hives (similar to the Tyrell corp building in Blade Runner). Pictograms on the outside (more abstract than original Aztec pictograms). Each step of the pyramid is surrounded by a moat on the roof of the step below (something nice to look out at of the window).

A world of 'Prism' belongs to the Rainbow Warriors and has been removed from Imperial Records.

The 'Rainbow' is derived from the legend that the world of the living is connected to the world of the dead by a rainbow bridge (similar to Bifrost in Norse mythology). The literal translation of their local name from the native language is 'warriors from beyond the rainbow bridge', which is often contracted to 'Rainbow Warriors'. This ties into the myth of the Rainbow Warriors as seen by the native people's of Tonal III.

Legend: The Great spirit of the world is seen as having many forms, and one of these is the Thunder Ghod Xolotl. During the time of the great crusade Tonal was brought into the Imperium by the Emperor and the Ultramarines, and his presence was taken as fulfilment of prophecy. He was said by the Great Mother to have an aura of many colours and walk between worlds, the one we see and the chaotic dream world. A god among men bringing salvation to a ravaged world.

Before then; Tonal was a dust bowl, a radiation hell-hole populated with isolated nomadic peoples. It is through the Emperors teachings of balance and harmonic systems through science that the world of Tonal was reborn anew. To rise from the ashes as the phoenix of legend. (This phoenix is thought to live as a mortal bird before death, and this 'phoenix' has a 'rainbow of feathers').

Due to the peace and harmony and lack of greed among these peoples the low level psykers were not killed. They seem to have a mutation of the navigator gene (likely from later ships), which manifests in women after the menopause as 'visions'. These women become the 'seers' and seem isolated from the horrors of the warp (they can see the warp, but the daemons cannot see them). Under their teachings; harmony and balance are all. This has lead to some extreme customs and concepts that many consider 'heartless' (origins of slanderous legends?).

The Ultramarines set up a base on Tonal III as a staging post. It could be said that the Ultramarines were the original 'Rainbow Warriors'. The local people saw many companies coming and going; with each company displaying different coloured shoulder trim. It gave rise to a rumour that they were of 'many colours' like Xolotl. The Ultramarines themselves are thought to be lesser deities of Xolotl.

The Strikes of Xolotol: The Rainbow Warrior tag is a common name (translation of high gothic) derived from the multi-coloured stripe on the helm. Their real name as far as anyone can guess, as they used a very old language, translates roughly as 'the strikes of Xolotol' and is most likely a reference to lightning strikes. It seems that each marine is a personification of a lightning strike, and this concept is born out in the ethos of the Chapter.

Armour: Blue with a green tint, turquoise trim and rainbow stripe on helm.

As an Ultramarine successor Chapter they use colours to denote their companies, except the colours are in the order of the rainbow, 1st company has a white trim, then red, orange, yellow, green, blue, indigo and violet with the 9th company with a black trim. The 10th company has no trim colour, or is marked as 'codex grey' (raw ceramite).

Ultramarine - fast attack, with an insane, and large, 9th company.

Initiation: Those who wish to join the Space Marines must travel over the rainbow bridge to the land of the dead. There they face the Thunder Ghod of mankind (Xolotl) who would judge those of pure spirit. Those who's passions proved pure are returned to the land of the living as Avatars of the Thunder Ghod, and those who deemed unworthy are devoured. Those who return are considered to be neither living or undead; but 'undead', and due to the marine's phenomenal resistance and pain tolerance it is believed they lack mortal concerns.

The recruit is sacrificed on the great alter of Xolotol and their still beating heart cut from their bodies. Only those who refuse to cry out in pain are accepted. Their body is dropped into stasis sarcophagus, before being eaten whole and carried over the rainbow bridge in the belly of the mighty Thunderhawks. There the dead rise, the breath of Xolotol brings new life, and the first implant of Space Marine Neophyte: a new heart!

The Rainbow Warriors are a Standard Codex Space Marine Chapter for the most part with a couple of notable exceptions in the 'white' and black' companies, the 1st and 9th. The colour companies follow Ultramarine organisation standards.

1st Company: All the members are 'dead'. They are entombed in sarcophagi to prolong their lives. There are arranged as a ring of standing stones, all hooked up to a virtual reality matrix. The mission of the 1st company is strategic and tactical command and a 'think tank' of warfare. They may take to the field of battle as white painted dreadnoughts, but are more likely to be found aboard a ship running Command and Control. There are no Terminator units in the 1st company.

9th Company: With black shoulder trim, and wear the skin of a honey badger, do not follow the laws of harmony. They see rules of balance as accepting chaos into the mix. They fight asymmetric warfare outside civilized norms were anything goes in order to win and impose order, and will do anything to bring victory. Mass genocide is preferable to a disordered society that refuses to submit. They bring 'real war' to the door, and many in the higher orders of the Imperium (who know about them) consider them utterly evil, but working for a 'greater good'. 9th Company will always take the dirty jobs, false flag missions, assassination of friendlies, counter-space marine actions (!), anything else the powers need to deny ever happened. All to bring about their idealogical unity.

They have been known to use very early marks of power armour, most notably the 'Thunder Armour' Mark 1 variant adorned with a black feather plume. This is used as it is similar to scout armour, and the powerful grip of the suit is used to rapidly crush unsuspecting victims in commando raids. The also use a variant of the power sword known as a Macuahuitl.

It is the 9th company that attracted the all seeing eye of Inquisition and subsequent attack by the Sisters of Battle, as the 9th were thought to be running a secret cult to the blood god as evidence by their wanton sacrifices and terror tactics. However the 9th were not caught, but the rest of the Chapter suffered heavy losses before the situation was resolved through the intervention of the Ultramarines. Technically even to this day the 9th are outlaws, they are considered tolerable only if they are not caught.

The 9th often leave a single black lotus flower (distinct DNA) at the epicentre of their actions (usually stuffed into the mouths of victims) as a calling card to the Inquisition so they know it's not the work 'chaos' (as it can be hard to tell them apart!)

Armour markings: The 9th mark hero kills with bees (the insect), initially as stencils, but later will set bee broaches set into the armour.

Terminators: Aside from this, each 1st unit of each of the 'colour' companies has access to Terminator armour.

They desire to restore balance to the universe, and that means all habitable worlds have human guardians, and they are the apex predator.