Intro to the Tau

The Tau are interesting xenos of the Warhammer universe, and remarkably similar to humans. While Warhammer 40K ties most of the sentient humanoids to the Slann body archetype, I thought it would be interesting to have the Tau as being derived from humans in some way. After writing a lot of stuff about the Iron Men of the Dark Age of Technology and their biological base technology (bio-photonics), if seemed like a good idea to make a link between the two and have the Tau are a development of the Iron Man's biological component. This doesn't mean the Tau are Iron Men, far from it, as the bio-component is rather limited.

This is my Tau head redesign (totally unofficial, and just for fun). I wanted to make the Tau look less human, and to get the lines of their face to flow in a more like a marine mammal. I've move the head split down between the eye (I figure it's similar in DNA structure to a inner part of a human nose) and the ears are gone. 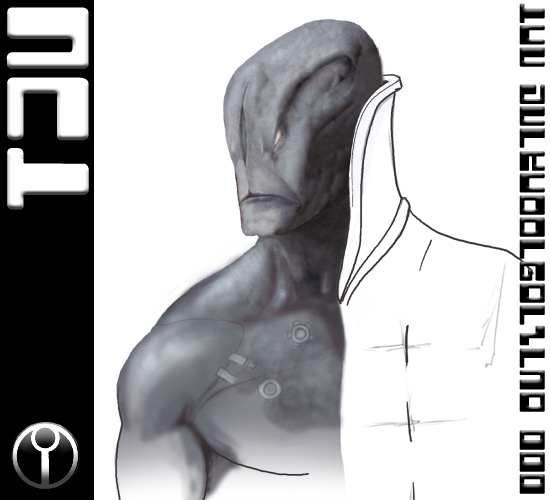 Thoughts from TauOnline.Org (Thanks Sephiroth!)

[Rough] Though the Tau are unaware of their true origins, it seems likely that they are derived from an early version of the artificial biology component used in the manufacture of Iron Men during the Dark Age of Technology. At some point in the Tau history it seems that the DNA of an indigenous animal was spliced into an artificial biology base of an Iron Man. This seems to have been done to allow for a full humanoid form and natural reproduction. It is unclear if this was then used as a base for the Machine's design of the Iron Men or a completely separate event, a research off-shoot of the original body of work.

Either way, the Tau biology is unique to the Tau, and a most unusual blend it is to. By all rights the fusion should not work, as they are virtually a chimera organism but at the cellular level, the artificial and natural working together in symbiotic harmony. However, there are some problems with reproduction and birth defects are common. It is for this reason the Tau have developed some astonishing surgery technologies, and combined with their natural affinity to the artificial, have developed some interesting interfacing technology.

It could that the Tau are naturally duplicating the Machine's research and will make their own cyborgs, transforming themselves in the image of the Iron Man.

[Rough] The Tau are derivative of an off-shoot of Organo-Crystal Hybrid tech development during the Dark Age of Technology. They are a missing link/ in between stage that lead to the development of bio-photonics fully humanoid bio-wrapper technology that allows Iron Men to be grown as a complete self-contained organism (before being transplanted into a hard-shell). In many ways they are similar to 'Bridge' technology and readily integrate with external hardware. In current 40K their genome is heavily contaminated with spliced DNA from the local fauna.

The Tau ingest a lot of silver. The silver aids in the inter-functioning of the two halves of the Tau body. A side effect of this is that the ingested silver produces the characteristic blue colour (Argyria) in the natural (spliced) biological layers (inc. skin). The silver interferes with their warp connection and reduces their already low signature. The silver will damped any natural psionic ability. The Tau are unaware of this secondary property (and assume they lack psionics).

The Eldar Harlequins have been implicated as being responsible for the original gene splicing, though as to why, no on knows.

Similar in concept to the engines used by Imperial ships when out of the warp. However, the Tau used a souped up version that the Imperium would consider extremely dangerous. In basic terms the Skim Drive is a single distortion engine, able to bend the laws of physics within the materium to allow faster than light travel. It does this by creating a field around the ship that can slightly alter it's phase with reality and plunge the ship into the border space realm. Within border space, the warp has great influence but no direct effect, and this allows the twisting of physics. While not are fast as a true warp drive, it is still capable of faster than light travel.

This is where the Skim Drive differs from the Imperial materium Engines, and the Adeptus Mechanicus limits the fastest engines output to 97% of light speed, which most far lower and running at 5%.

Whereas the tau Skim Drive regally outputs 800% or more.This puts the ship very deep within border space, where is actually 'pushed-back' by the great barrier. This effect is where is derives it's name 'skim-drive' because it skims the great barrier and never penetrates. The fastest skim-drive regularly hit 20% phase which results in excess 100 time the speed of light, however the energy required to do this is astronomical (inherent inefficient concept/ system) and shield failure is almost guaranteed (no void shields!).

Chart of Imperial and Tau concepts of space and the warp (rough, imperial border-space materium side the Tau think is the 'warp')

Traveling at faster than light mean the ship will experience tremendous impacts. Even with the skim-drive field acting as a power field to destabilise matter, being hit with subatomic particles at several times the speed of light will destroy a ship. Therefore the Tau do not 'open the throttle' and push the ships beyond 20% phase, because by then the field will be penetrated by any matter that it strikes, the matter will not break apart in time before impacting the ship. So Tau speed is limited by their shield technology.

Ironically the Imperium has no problem with this as they have void shields, but void shields have been known to fail and so are not stressed unless absolutely necessary and with explicit authorisation from the Adeptus Mechanicus (considering all technology is 'theirs'). The Imperial ships are limited by politics. They are also limited by navigation systems installed (Adeptus Mechanicus do not share everything!)

Impact: Effects of impact of sub-atomic particles on a ships hull is unusual as they are moving so fast they will penetrate very deeply into matter, rending all atoms on the way, before releasing their energy (collected from the impact with the field). A 1cm meteor traveling at light speed will destroy a planet, a 1cm destabilised meteor traveling at light speed with impact similar to a small nuke detonated within the target.

So why not use these distortion engine skim drives to make weapons. Two reasons;

A basic skim drive is a hugely expensive device. It is so unbelievably expensive that most rich worlds on their own would have trouble funding the construction of one. They are built by a factory run by a federations of thousands of worlds.

Skim drive use super powerful plasma constriction engines that produce power by crushing the hydrogen core with power fields. This literally creates a micro-star and borderline singularity. It yields anti-matter and dark energy, and goes far beyond what we in the modern world think off as a fusion reactor.

The control system of the plasma constriction engine (PCE) is artificial biology constructed 3D holo-chips with photonic lines and the computing power beyond anything we can image (petra flops, try google flops!).

The drive system, is even more advanced and incorporate simulated 'Psyker' nets build with dynamic power fields to create the base distortions in reality which are magnified into the skim drive field. These are sentient artificial minds, and can think and feel.

The navigation system is wired into the drive system, and has to think faster than light using predictive phased quantum tunneling based sensor arrays.

All these systems are way beyond what a single world can manufacture, and often it takes the resources on a whole world to create one component. The drive 'psyker nets' are massive blocks of bionite built dynamic photonic crystal, and while that is virtually impossible to design at first, once known and seeded it is quite straight forward, however, getting it programmed and initialised into a life-form is a monumental task akin to conjuring mankind from thin air. The power plants needed, and the machines used to pull of this impossible task, take up whole continents. Often reaching up into orbit to harness space borne power generators that drain Stars. Once initialised, and the centre is vaporised into a power field caged mind, it has to be kept fed of it will 'die' (and start again).

While this all sound pretty advanced, it is nothing compared to building a true warp engine. The Tau have a very long way to go before they can rival the Adeptus Mechanicus in such a technical tour-de-force. In fact many Tau consider the Adeptus Mechanicus as 'devil-worshippers', or chaos agents, as the technology the Ad-Mec uses is so advanced even the mighty Tau can't get their head around it.

'Any sufficiently advanced technology is indistinguishable from magic' - holds true for the Tau too. The Tau are not that interesting in the Adeptus Mechanicus technology because they assume it is witch-craft of a sorts, chaos sorcery, in some ways they are correct. Making a warp drive is messing with the forces of the universe and will allow a person to actually leave reality. In many ways it is 'magic' (in the original Greek sense of the word). The Tau simply do not want any part of it - fear of the unknown is a powerful thing.

A random story resurrected from the ol' Black Library Forums: Rise of the Tau (123 chapters, 147 pages!)