The Eldar are basically the Elf archetype (as re-imaged by J.R.R. Tolkien) in space. In 40K the Eldar are tall, graceful, 'humanoid' aliens - though the correct term should be 'Slannoid'. It is the might Slann who were the first sentient beings, and it is they who brought about the Eldar, Humans, and many other species which share a similar body type to the Slann.

All the types of Elf, from the early Western mythologies or Tolkien's creations, share common concepts. They are all supernatural beings, highly spiritual, magical, wise, beautiful and ageless. They are not true immortals, as their body can be destroyed, but many of the various versions seem to retain a self-aware soul after death that can be reincarnated with memories intact. This makes 'them' immortal after a fashion.

Their usual flaw is one of overpowering emotions. They have to control these inner demons else they degenerate into savage beasts slaved to base desires. This concept even carries on to other derivatives of Elves in Space, like Star Trek's Mr. Spock. The Elf controls the raging beast within through sheer will (and logic), yet this inner beast drives them to excel in all things, and through this drive, and long life, they have become very powerful. 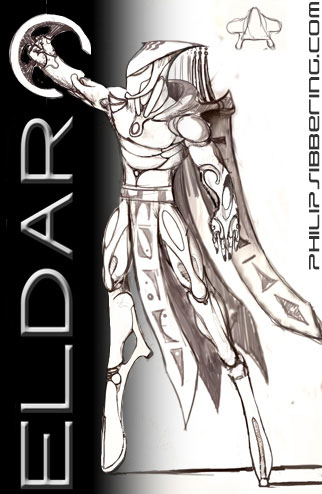 In this redesign I wanted the Eldar to be taller than humans yet retain a similar build and weight. I wanted to give a feeling that they are fast, very fast, and physically powerful. Obviously if a human form was retained this would result in a very thin and weak looking body type. The 'thin/ weak' don't really go with the idea of fast and powerful.

Both of these design goals were solved by extending their feet, and having them always stand right on their tip toes (like a ballet dancer). I didn't want them to ever put a heal on the floor – so I removed the heal! The ankle joint is a variation of a knee joint, and is fully lockable in the straight position (unlike an animal or the typical ‘beast-man' which is always has to be bent). They can stand relaxed as we can, locking both ankle and knee and expend little energy remaining upright.

Being on tip toes all the time, and on the end of very long legs and feet, means they need far better balance than a human: hence the Eldar ear development, especially the inner ear. The extended outer ear (the Elf look) has a fluid chamber in the upper portion which aids is balance as a fine tune. Those pointy ears are their for a reason.

This combination gives the typical 'Elf' form: they are tall, slender and graceful, yet they are also fast and powerful and can match a human in hand to hand combat. The human will have an advantage in grappling, but the Eldar is very agile and hard to catch (and they can never be caught 'flat-footed').

Once the body type was sorted, and I knew what I wanted my version of the Eldar to be, I turned my attention to the other areas of the concept.

The Eldar are often though of as being akin to some form of advanced primate by Humans. Much of this confusion is due to Humans and Eldar sharing obvious similarities, and this had lead many to believe that they are both related to each other in the distant past. However, as any xenobiologist of the Adeptus Mechanicus knows, the similarities are really only skin deep. The truth of Eldar biology is startling and quite bizarre. It seems the Eldar share a similar body type to humans by design, rather than evolution, and this design was created by an far older alien species.

Spirit Stone: The Eldar where created by the Old Ones as spirits, not as corporal forms. The Eldar spirit's natural habitat is within the crystal-matrix of Wraithbone. The habitat within the crystal-matrix is a modified materium reality of the Aethyr (similar to the winds of magic essence in WHF) that exists on the mundane side of the great barrier. The Wraithbone can be fashioned into a device such as a 'spirit stone' which can contain the spirit of a single Eldar consciousness, or on a much larger scale such as the Infinity Circuit which may contain hundreds, thousands, millions or trillions of spirits. The Infinity Circuit is the Eldar equivalent of a 'city' of spirits, and massive communal spirit stone. The Infinity Circuit do not have to be fashioned into bland stones, and are more often the basis of star-ships or the mythical craft-worlds, planet sized ships drifting in space.

Avatar: The Eldar fashion Spirit Stones to contain a single Eldar mind. This is done so a spirit may leave the Webway and perform physical actions in the materium. In order to allow the spirit stone to move about and communicate it is attached to a humanoid Avatar. The Avatar is a bio-mechanical creation, and Spirit Stone links to Wraithbone network within the Avatar's form. This allows the Eldar spirit to 'possess' the Avatar and function as a living being (biomechanical machine). Upon the death of the Avatar the links are severed between the Avatar's network and the Spirit Stone. This way the Eldar's spirit in completely unharmed. Spirit Stones are exceptionally tough (able to withstand high temp and huge impacts). In all aspects the Spirit Stone is the Eldar's mind, but it also acts as an anchor for the Eldar's soul (warp image).

Form: The most common form of Avatar encountered by humans is an approximation of the human form (actually it's an approximation of the Iron Man form). The Eldar create such humanoid forms to allow easy interaction with humans and to interact within human environments (and the many other humanoids they encounter). The form is considered 'Elven' by humans and this was chosen on purpose because of the psychological implications and assumptions of humans. The form is very common and whenever humans meet the Eldar it is this Elven form they will most likely encounter. There are other forms in existence such as the 'True' Eldar.

True Eldar: This is the Eldar's favoured biped form, as they consider the regular humanoid design cumbersome and flat footed The Eldar prefer a far more efficient and sleek design with far greater mobility and Psyker line routing. The 'True Eldar' form is not the true form of the Eldar. It is merely a favoured design, and not often encountered by humans. The True Eldar design is not without its drawback, the most notable being height (around 10 feet) which can make it difficult to move freely within most humanoid built interiors. There are other designs but they remain undocumented.

Drones (Wraith-Guard) : These are the common 'warbots' of the Eldar. Imprints not true souls.

This is a redesign of an Eldar ship, a cross between: A Ferrari, The Enterprise and a Swan (for some reason it makes me smile). I wanted the ship to have Wraithbone struts and a slight skeletal look but was careful not to make it look to Nidish

The wings/ sails are warp power collectors, that draw warp energy and covert it into safe Aethyr power to run the ship, maintain the Wraithbone and with the Infinity Circuit the ship can be considered alive and able to self repair drawing all energy and material from the warp.

Eldar have a fundamentally different technology to humans, and I wanted to emphasis this in the design of weapon and equipment. To make these designs seem more alien to the humans mind, I redesigned the Eldar hand to a two thumb/ two finger design, so their grip is totally different to ours. Hopefully if a person hasn't seen the Eldar hand any weapon should be very confusing, because the design isn't't intuitive (to a human) as to how it is used. As Eldar technology is different to a humans, the design of equipment can be quite radical.

The device the Eldar is holding aloft is normally wielded in pairs. It is a combination weapon: a shield generator, power blade and distortion wave pulsor. All Eldar weapons are Aethyr powered, driven by the Eldar's ability to draw from the warp. The Eldar use the warp as a 'battery'.

All Eldar are Psykers, but they have been engineered by the Slann (Old Ones) to be so in a certain way. They use their telepathic abilities in conjunction with Wraithbone based artifacts (including their Avatars) to draw warp energy into the materium. This energy is then used as the basis of Psyker powers or condensed with mundane elements into more Wraithbone and fashioned into new artifacts. Therefore the Wraithbone acts as a filter and buffer to the raw warp. This is far safer that the direct linking human Psykers use, those the power output is nowhere near as great.