Of Ghods and Primarchs

Fans of Warhammer 40K endlessly speculate on where the Emperor of Mankind appears in our history, and perhaps which famous person he may have been. The topic comes up regular as clockwork on forums, along with other 'classics' like the lost legions and female Space Marines. It seems to me that a being of such immense power as the Deus Emperor would show up in our history and be very noticeable. To this end I formed the concept of the Emperor as the Thunder God (Zeus etc.) of Earth's many myths. Here the Gods of antiquity are re-imaged and re-packaged for 40K. The mythos of ancient Greece forms the basis of this concept, but it is not a 100% match-up, also the history or 40K gets a tweak or two

In eons past, the very first humans were Psykers of immense power, created by even greater abstract beings known in myth as 'the Titans' (Old Ones), to be used as weapons in war against the minions of evil. These psykers would be considered 'Alpha Class' or greater in the current Imperium. These a the first humans to come into being and were called 'Ghods' in the first language. It is from these Ghods that all later humans sprang, yet each generation was diminished and lesser than before until they become mortal (think Hesiod’s Five Ages). The children of the Ghods remember their parents yet through the eons the details blurred as stories passed from one generation to the next shorter lived generation. Fact become myth, and eventually fell out of favour and seen more as tall stories, great sagas for poetic art, than records. 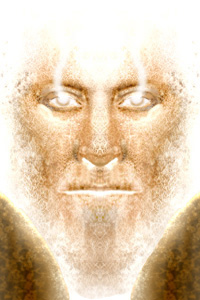 One of the most powerful of the Gods of our history, and who turns up in many cultures around the world, is the Thunder Ghod; Zeus in ancient Greece, Thor of the Norse, Xolotl of the Aztecs and Xevioso of the So, the Thunder God is prominent in all cultures.

This Thunder God is the proto-Emperor. Towards the end of the mythological era the Thunder God consumes all the other Gods and absorbs their powers (in the same way Zeus ate Metis, his first wife, and absorbed her powers). The Thunder God did not consume any powers from 'mortal' humans. This new God is the being who would later become known as the Emperor in 40K, but long before that: The Sun God 'Atan' of Egypt (about the time he consolidates his power).

The Emperor did this in order to break the wards of Terra's warp gate to allow all to escape into the web way, but ultimately failed. It would be many years before the Emperor could leave the confines of Terra thought he use of technology, and gain the knowledge that would allow him to retry opening the Terra Gate.

The Primarchs are genetically re-engineered clone 'sons' of the Emperor. Their bodies where created without souls and act as vessels for the reconstituted consciousness ripped from the Emperor's own gestalt soul. Only the Emperor's unique warded DNA structure could contain such power, and coupled with his vast arcane magics beyond alpha ability could allow him to forge these 20 divine beings. The creation process greatly weakened the Emperor, but the advantages outweighed the sacrifice. Each Primarch is a god of antiquity reborn. Their very being infused with the positive essence of warp giving them immense psionic enhanced powers. Such is their might they could scatter whole armies and be unscathed. It is these 20 gods that gave rise to the hordes of demigods [Nephilim] known as the Adeptus Astartes (Space Marines), each as strong as Hercules himself and bound within archaeotech to further enhance his powers. It is these armies that retook the Galaxy for humankind.

Quote: "Magnus the Red was a giant of a man, standing far taller than even his brother Primarchs, his hair and complexion a livid red. Most remarkable of all was the enormous cyclopean eye set deep into the Primarch's forehead; where normal men have two eyes, Magnus had one. His strength was lauded as rivaling that of Russ, but he preferred to expend his energies learning and pursuing ancient arcana than the art of battle. His physical peculiarities were never remarked upon by the other Primarchs; after all, Sanguinius was blessed with wings and Leman Russ himself bore the sharpest of fangs. Nonetheless, the Wolf-King feared that the taint of Chaos was ingrained within the giant's soul. But the Emperor would not hear of his suspicions, as Magnus was one of his own sons." 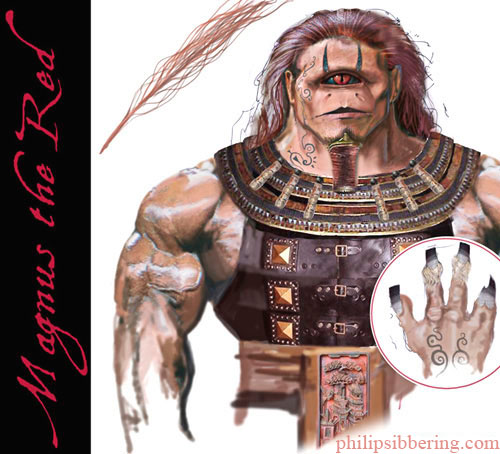 This is my version of Magnus as a Cyclops. I wanted him to look mutated, but also to look noble and intense (don't stare into his eye, it make you go funny). In general in never like the designs of mythical Cyclopes, this is my solution. I removed the nose which is one of the biggest design problems, and replaced it with pits on the upper lip. I imagine Magnus to have Navigator DNA and his eye is similar the Navigator's warp eye, only far more complex. The 'hair' strand to the upper left is branched, similar to a feather (the touch of Tzeentch?). He has further mutation on this hands, with the ring and pinky fused together, his nails are very thick like a hoof.

In the original Rogue Trader rule book High Gothic was said by Rik to be derived from 'Tech' an assimilation of English, European, and Pacific Languages (and not Latin, the Anglicised Latin is a place holder for this later language; High Gothic occupies a similar place in their society as Latin does in ours - more of my musings here). I tried to reconcile this by using phonetic Japanese, as this allows english words and also cool pictograms for tech stuff - I got the idea from all the Asian signs in the Rogue Trader.

this is Magnus the Red rendered as 'Red - Magnus' in phonetic Japanese. This means it is pronounced 'Red Magnus' but as you can see it does not look like 'Red Magnus' to English speakers. Although not a perfect example of High Gothic, it illustrates the principle that is it not a language like ours, and that many of the 'letters' do not in and of themselves define a specific letter but a sound. I image that High Gothic is a bit like English and Asian languages rendered in phonetic Japanese, except the language has a few thousands years of extra evolution to it. Many of the evolved Latin word roots are condensed into characters, and this is combined with traditional characters (Aside from a Linguist, if you were a Japanese Medical student you would have best chance of understanding High Gothic). The languages are also combined with hieroglyphs and hybrids (as it the case on the World Magnus landed). Low gothic, or local languages are derived form high gothic and are less fluid and are 'set', where letters take on a role more like many current world languages (High Gothic is a bit complex for every day use and without implant technology).