The Imperium is consists of a million worlds, all with their own interests and culture, vying for power. Keeping such a vast empire from fragmenting requires not only a firm hand, but a sharp mind. Effective intelligence gathering and prompt convert action has saved many a world. It is the holy Inquisition that is tasked with securing the Imperium from within. Seeking out the traitors and deviants that would divide the Imperium, bringing humanity to it's knees, in the face of untold alien threats and ancient supernatural powers. 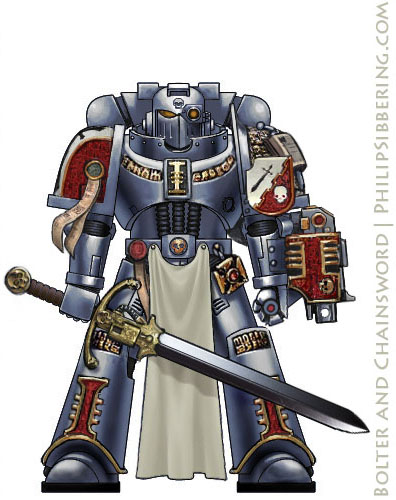 There are many forms of daemon host; from the possessed body to the reanimated flesh, even objects containing the consciousness of a daemon are possible. No matter the form the effect is the same: a daemon is able to exist in the materium. The Inquisition can not allow this, and seeks out these 'hosts' to exorcise the daemon within. The termination of daemons is carried out by the Grey Knights (seen opposite) The Military arm of the Ordo Malleus. What follows is some of the general classification of daemonic hosts they encounter.

When a human dies their soul's claws are torn free from their anchor in the materium by the draw of the chaos powers. The soul is pulled down into the warp where they break apart into component memes which, in time, form the basis of new daemonic manifestations. This is the doom of mortal man, yet some men are not meant to be mortal.

Powerful Psykers may be able to resist the pull of the tide, and cheat death. All humans are a mixture of a materium flesh and a warp 'soul', the nascent daemon within all of us, however the balance varies. Normally the soul is weak and clings to the flesh, until the flesh system dies and the soul looses it's grip. Psykers are more soul than flesh. Where most humans are overbalanced toward the flesh, these luminous beings are overbalanced towards the 'daemonic' side.

When they die, as all flesh does, they resist the pull. Their power allows them to manipulate and use the energies of the warp, they can exist within the shallows of the warp and look for a new host. These powerful souls attack a person's soul from the warp side. Sometimes they rend the living soul from the body and replace it entirely, other times they co-occupy it, or mostly 'wound' the soul in their wild frenzy as they are dragged down to hell. If successful in their possession they are far more stable than a true daemonic entity possessing flesh, they will still die as mortals do, but they can jump from host to host.

There is one of prime concern to the Imperium, one that is far more dangerous: the Vampyre (Vampire). This is a Psyker who is so powerful that when they die they cling to their own dead body and reanimate it. They refuse to leave, and fight to stay. Normally this base instinct is not enough for a human, but due to their psionic power they endure. As they endure they are bathed in the energies of the warp and start to gain power. As they grow in power they feel their flesh once more and start to possess their own dead flesh. Due to the massive increase in power they are able to regenerate the flesh and once more the flesh lives. Now they are immortal.

Such unnatural events come with a price. While they writhe warp side, starting into the abyss, the energies they draw upon are raw and powerful, infused with emotion destined for deep and ancient gods. This energy pulled to their soul comes with it's own desires, for it contains the patterns of broken apart souls, and that has an effect upon the emerging Vampyre, a raging thirst for life, often expressed in blood drinking, but really soul consumption.

Gifts of the Gods

In the story books of old; each of the Great Powers, those who reside deep in the warp, give their 'blessing' to the Vampyre. The chaos gods can do this as a Vampyre has come too close to their influence, and is now and forever an agent of chaos. This is the doom of these beasts, and they will cause chaos wherever they go - even if they do not intend it to be so.

Nurgle: Regeneration. The first power of the Vampyre 'given' by father Nurgle. The Vampyre is effectively immortal and can not die. Killing a Vampyre is very difficult and dependant of power. While some may die with a stake to the heart, unable to rapidly repair the body and cling to the materium, others maybe be burnt to ashes and yet still regenerate in time.

Khorne: Blood Lust. The need for blood. There is little use for the blood other that it lives and continues to live for a short while. In the short while the elements of soul energy attached to the blood is brought into the Vampyre and ion the warp side it's soul (now a daemon) surrounds and absorbs the energies. These energies are 'untainted' by the greater chaos powers but still infused with humans desires and fears. A Vampyre loves the taste and feeling, and knows the Khorne has cursed him, yet the Vampyre continues as it pulls away from the warp, from Khorne and the others, and thus pulls away from Psyker energies. This is a balance.

Slaanesh: Deviant behaviours. As they are not really human, their regenerated body does not feel like a human feels. There is a constant numbness (thanks to the regeneration - heals so fast they can't feel). This leads them to extreme acts to 'feel' though often their go for provoking strong emotions (which is like sunlight to them, and 'love' is the most brilliant, though fear and loathing apparently have their charms). However, they may also cut themselves and torture others 'just to feel'. The degree of self-mutilation is often dependant of power, with the stronger Vampyres being the worse (greater regeneration!), while other times they grow weary, until they see and object that rekindles their desire. These who discover the feeling of bathing in 'love' are the most dangerous of all.

Tzeentch: Egoist and megalomaniac. The Vampyre is obsessed with becoming 'human' but with all their powers intact. The scheme and plot and experiment in a desperate attempt to find a way to realise their twisted dreams. In the single minded pursuit of their goal many fill suffer, and they will work great evil. Many turn to the medical arts, and seek new ways to cheat death and correct the errors of the flesh. Others have been known to infiltrate the Adeptus Mechanicus. Due to the quick wit and deep mind they can fool almost anyone, and get inside their head. Vampyres are master manipulators and have the Psyker feedback to gain the edge.

In folk lore it is often said that Vampyres can breed other Vampyres with a 'kiss' (bite)/ This is an exaggeration as the process is far more involved, and revolves around 'love'. A Vampyre in love (really in love with the way someone who is in love with them feels in their presence) and their partner accepts them for what they are (usually after much manipulation) the Vampyre may perform a soul blending, where their powerful soul pumps energy into their 'loved one'. This may elevate their partners innate Psyker powers, but the real 'gift' if the gift of the gods. The new 'Vampyre' suffers from the gifts as the master Vampyre does, but to a lesser degree.

A powerful Vampyre can 'animate' the flesh of the dead by acting as a middle-man between the corpse and the daemons in the warp. The Vampyre heals the corpse with its own life force and facilitates full demonic possession. The corpse is still dead, and the demon can not heal it, so the Vampyre has to channel energy to maintain the corpse and in turn the possession. It is rare for a zombie to survive for long before deteriorating and perishing in a flash warp fire as is the way of materialised daemonic kind. Zombie powers vary due to the Vampyre's power levels and the daemons who possess the corpses. Some zombies are very fast (think rage virus) due to Khorne, who is a favourite choice among these fiends, others are clever (Tzeentch), may look human (Nurgle) and some are just not right at all (Slaanesh). Some may even be a mixture, depending of ritual and the addition of sacrifices. The is never one type of Zombie, that seems to be many ways to create them, but they all have two things in common - a corpse and a possessing spirit.