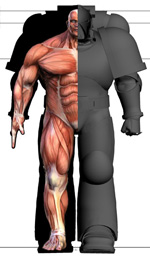 In retconning the Space Marine transformation process, from candidate to battle-brother, the step is to first define the type of candidate the marines would except. This should clear up what we can 'realistically' expect (suspend our disbelief) of what a marine will look like at the end of the process, and hopefully make the marine as depicted in the GW novels and imagery seem a little more plausible.

Archetype candidate: It seems in the novels and comics that marine candidates are no lightweights, they are often super muscled even before they are neophytes and all are champions on their own world with a lot of fights under their belt.

Cline: Looking at humans in 40K there is a lot of diversity in the characteristics of human across the population cline: from (abhuman) squats - regular humans - Ogryn (abhuman). All are technically 'human' - not a sub-species or anything like that.

Choices: This gives the Imperium a vast range of humans to choose from, and considering how uttering tiny the percentage of humans the marines draw from the Imperial population really is, and how fussy they are about candidates, I suspect that the 'regular humans' the marines choose may not be a regular humans as we see them. I suspect they simply have to not be abhuman.

I remember reading somewhere, not sure where, that due to their physiques that the Catachan Jungle Fighters where called 'baby ogryn' (Lexicanum). These humans, the Catachan, are massive but they are not classed as 'Ogryn'. So it seems regular humans can be pretty large in 40K, far larger naturally that humans in our modern world (as in a whole population rather than a few).

I suspect a human population where the average is around 7' 30-400lbs is not impossible, or 7'6" and 600lbs or pure muscle. I'll call these humans 'super massive' in the next bit.

Candidates retcon: I imagine the candidates would be taken from stock that is 'super massive'. Where a regular human on a world would grow to at least 7' naturally when mature, and probably have massive skeletons (far more powerful than ours) and able to carry 400-500lbs of bulk with no trouble (think 'Neanderthal' but a bit more refined). A child of this population could be as large as a regular modern human average or even larger. A teenager would have a physique of a super athlete and able to outperform any modern day athlete in track and field and tests of strength. They would also have natural relaxed musculature.

Misconceptions: It would be easy for a regular human, who judges others by what they know, to mistake these candidates for fully grown men. They would seem like very tall, strong and massive men. Yet they may all be very young and their parents (in comparison) would be huge.

Note: This may explain some of the continuity problems of candidates being very young yet being 'heroes' and seeming like they are much older.

Growth: While being transformed the actual growth may seem like a massive increase if we imagine a regular human like you or I gaining mass to become 7'6" and 780lbs (as I imagine them). However a human from super massive stock would probably naturally reach 7'-7'3" and weight in at 400-500lbs of natural muscle. An increase to 7'6" and 780lbs of enhanced muscle and bone density would probably not be that remarkable.

Recruitment: This retcon would explain why marines are so fussy about who they accept. They will not recruit from regular humans with physiques like modern day humans, or even modern military special-ops types are they are simply too small. In addition the specimens should not be 'abhuman'. I imagine there is a very small proportion of the Imperial population that can generate the type of humans the marines want. Very small. I don't know if the populations of the marine worlds are 100% natural, or if the Ad-Mec mess about with their genetics to make populations to spec, but I think they are few and far between.

Marine size: using this retcon, and the justifications therein, it seems reasonable that a marine can be the size they are in the imagines (inc my art) and novels without it seeming implausible. A regular human, as judged by our standards, simply isn't marine material. There isn't a single human alive on our world today who would be accepted as a marine candidate. Not one. All throughout our history we have never produced a human who would be accepted as a marine, though some in our ancient myths and legends have come close - but even our demi-gods probably do not measure up.

Note what we think: Marine candidates are not humans as we think of them. If we saw a 'super massive' @ 7'3" - 500lbs with a powerful 'Neanderthal' skeleton we would be shocked and probably think of them as non-human. They sure wouldn't look like a body builder at all, but I think most would quickly guess they are fantastically strong, and once they see them move deduce they can cover ground quite quickly and to keep our distance. They may not be as mobile as a human like us, but they are going to be smart and 'human' in their fighting (I mean, boxers can catch chickens, so a marine candidate could probably catch a faster and more mobile regular human - body may be 'slow' but arms are fast enough).

A beginning: This would be 'phase 1' of my space marine background retcon - getting the basics in place.

PS: Be thankful I do not write for GW!