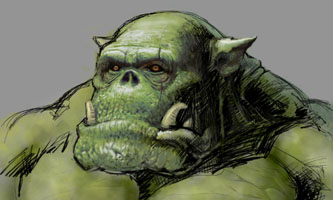 This is an idea for Orgs, the Sciror version of Orcs/ Orks. I like the Warhammer version of Orks with spores, and the breeding cycle of Genestealers and thought about combining the two and messing about with the blended concept to play into stereotypes about teenagers and counter-cultures. I also wanted a bit of the 'The Thing' and 'Invasion of the Body Snatchers' in there too. All to create a potent invasion organism that attacks from the inside on many layers.

Concept: The Org spores infect a person and get into their blood. The spores affect the gamete cells, and hence any subsequent child derived from them is altered. The child would appear to be normal, but the Org characteristics lay dormant within the child. When a child reaches puberty they start to transform (many parents would agree with this!).

It would be like a 12-13 year old pumped full of growth hormones and steroids (far more than usual). At first they may seem athletic, but soon it goes completely haywire. They loose teeth, and a third set (with tusks) breaks through. They shoot up in height, pack on muscle, eat nothing but red meat, and are prone to 'roid rage'.

They form gangs, hang out of street corners,  and attack humans. Their behaviour becomes more extreme over time, until they start killing and eating humans. They become a head-hunter 'serial killer' gang. As they mature they become green, first blotchy, they all over.

The final transformation is when they 'die'. Once the heart stops it triggers a massive change, and the Org 'reanimates' the corpse, and it is driven by an extreme hunger. Now the 'Orc' is out of control and rabid. It becomes a berserker driven by primal instincts (very true if their was massive brain trauma).

This final stage is the end game. The Org is probably part of a gang (which it still recognises) but it has gear and weapons acquired while still in the 'human' stage.

The Org are rebels, insurgents, and revolutionaries, they are anarchists, vandals, destroyers, nutters, psychos.

Their sole mission is to destroy civilizations from within. The Org gangs can be styled after any gang, warband, or counter-culture from anywhere in the world, or sci-fi inspired gangs from anywhere (or any-time) in the world, or completely made up. This allows Player to style their Orgs as they see fit. They could wear tartan kilt with blue face paint, or Samurai gear, even Ninja Orgs. Anything and everything - a mix of Org and human - hells angels, chavs, Blackwater Mercenaries, you name it.

The role of Mature Humans who are infected: a mature human who is infected will still transform on death. I'm considering this make a smaller 'Goblin' type, that is cunning and avoid direct fighting, and sabotages the food supply, hospitals etc all with intend of creating conditions ideal for spreading the infection.

Until death, a mature human who is infected as an adult, may exhibit secondary, far less pronounced, transformation traits.

This is an advantage for the Org as such infected contractors would be hard to spot and would be sympathetic to up and coming full Orgs. These infiltrator Orgs may have extra muscle mass and aggression. This allows the Org to infiltrate the military and retain their cover, not alerting the command structure or others, yet at the same time may be 'heroes' (and spreading infection).

The idea behind this would be that the Org want to infect military personnel (though this is more instinct; they want to fight and the want to retain cover and play by the rules) as their children will be infected and transform into 'hobgoblin' Orgs and probably have some training due to their parents. The parents may even protect their transforming offspring.

In a game, this could be used as special rules for turning seemingly uninfected enemy units into 'traitors' and launching a surprise attack from within. The Org tend to see their infection as a 'gift', and want to get rid of other humans (who they see as weak) or convert them. However the society is not stable as the Org will turn on each other when all the regular humans are gone. The Org organise into tribal units and hunt down other tribes. Only the strong survive on an Org world, a world of endless fighting.