It's a common misconception in the Old Worlde that Halflings (as the are known throughout the Empire) are nothing but short humans. This misconception continues to propagate in no small measure due to the efforts of the Halfling community, who find the ‘human’ label to be highly advantageous in their dealing with humans.

The Roots of it all

According to the late prof. Hecktor Zalwich, who died is a freak yachting accident, Halflings are not human kin in any way, shape, or form. They are most likely related to Ogres based on his research conducted during his ill fated expedition to the far away lands of Cathay. In his controversial and outlandish paper ‘Halflings will eat us all!’ he stated that all Halflings should be considered ‘Pygmy Ogres’ and most definitely not human. He went further, to add insult to injury, and stated that many children who went missing in the Empire had been eaten by Halflings after being enticed to run away, with sweets and cookies, to join the many circus that tour the Empire. He added a dire warning that as Halflings continue to grow, in girth and political power, so would their appetites and one day they would then start to eat adult humans.

A conflicting paper by renowned scholar Jane Five-Bellies (Jimama Porpot-Walgg), says that such ignorant and ill constructed ramblings would only serve to damage inter Human relationships and that we should all make attempts to live together regardless of trivial differences. She continued by pointing out the obvious flaw in his scaremongering; that Ogres have been part of the Empire community for many years without incidence. So even if all Halflings did become Ogres, which was blatantly untrue as she was 111 and as tall as when she was 30, it would pose no danger to humans what-so-ever. She concluded that he was very old for a human and had lost most of his marbles. This was further born out by the conditions of his accident.

Fact? Ogres rarely eat humans unless absolutely famished, which did happen in some of the Araby wars, but in general humans where the last thing on the list to be eaten. This fact is often put forward to show that Ogres have a deep love and respect for humans that none could deny.

Another voice in the debate of renowned Merchant and prime mover Navich Colk, who said he found evidence that Halflings where all children who had been cursed by the Vampires to never grow and should be given sanctuary from the undead of Slavina. In an impassioned plea he begged his fellow humans to ‘think of the children’ and promptly launched the ‘Adopt a Halfling’ charity, seeking childless couples of respectable families to take in Halflings and allow them the ‘childhood they never had’.

This theory was rebuffed by Jazz Wide-Grin (Morte Corvus-Naff) who said that treating Halflings like children was demeaning to the Halfling people and condescending in the extreme. However they would work with the charity to find homes for orphaned Halfling children who lost parents during the largely undocumented Halfling war against the undead. He stated it was the least the Empire could do considering the selfless sacrifice the Halflings had endured to ensure the continued lavish lifestyle enjoyed throughout the Empire elite.

Fact: The Colk Foundation is still in effect today, working as a student/ cultural exchange program to build bridges between the two peoples. Many upper class families enjoy the company of Halflings due to the extraordinary social grace, bawdy humour while on the port, and fine cookery skills. Halflings like nothing more than to cook, and humans like nothing more than to eat their exotic and tasty dishes. Halflings never ask for anything in return, saying the the pleasure of their host’s company was enough. Though humans often make outlandish offers, and have financed some Halflings in various pie shops around the empire in the ‘pie to the people’ initiative, followed by the popular ‘let them eat cake’ campaign of free cake during the great famine caused by the great war to the North.

‘Ogg’ is the root. This is combined with ‘inn’ which means ‘part of group’. Within Ogginn society this usually means a extended family. It is a corruption/ evolution of Old Slann language.

So Ogginn means ‘an Ogg that is part of a group/ one of us’.

Halflings who are outcast are referred to as Oggs, but it also refers to those without any family (inc orphans). However Ogginn are a friendly bunch and with take in Oggs, which in turn makes them Ogginns.

Ogginn are found all over the world from the Pygmies in Lustria to the Halflings in the Moot (? change)

Ogginn are short and human like, however they are not the kind and friendly people most think they are. Ogginn have huge appetites and a taste for the exotic and danger. They are often cunning and usually know everyone there is to know on both sides of the law. While they are loyal to their own (those with the ‘inn’ tacked onto the end of their name), they can be ruthless and bloodthirsty toward those they perceive as a threat.

Ogginn love to socialise, they delight in it more than any other activity, gossip and skulduggery brings broad smiles to their faces, and they love nothing more than new tales from travelers. Often the set up meeting places where the can chat and drink and travelers can rest called ‘Inns’ named after the concept that those in the building are on the ‘inn’ (from Ogginn).

What is unusual for the Ogginn is that while they like humans, they like them a little too much! Those who they dislike will end up in a pie and served to future customers!

Ogginn may be small but they know people, they can anticipate hostility, and will poison food or use firearms to defend themselves. They also have links with the Dwarfs who find Ogginn are little bit worrying, though they know it is unlikely that they will end up in a pie or stew as Ogginn do not like the taste (too tough apparently). As the Dwarf saying goes ‘never sit down with a Ogginn, as you may never get up’. Older, fatter Dwarfs are more worried by Ogginn than young muscular Dwarfs as they know they may be on the ‘tasty list’ and will start to bluster and threaten if they encounter an Ogginn, and will not eat with them under any circumstances (even if starving, or at least until they shed a few pounds). There is a story of a Dwarf miller who was captured by Ogginn and thrown in the pit to be saved for the Harvest Festival. The Dwarf refused to eat knowing his fate, and instead relentlessly worked out every day. Three weeks later he had lost so much weight and become so tough and sinewy that the Ogginn turned her nose up and let him go!

Ogginn favourite humans are fat humans. Nothing tastes better than a fat human feed on good food! Apparently the cracking is to die for! Ogginn’s prime target are usually merchants, they have tall tales are usually articulate and when they run out of words they taste great.

Ogginn do not like Elves at all. If you think humans have problem with Elves you should see what Ogginn think! 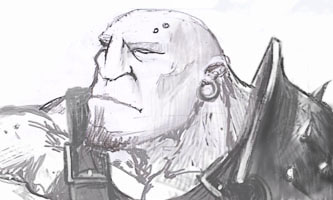 This is a hybrid of a human female and Halfling male. There are never any hybrids from male humans and Halfling females. Ogres are large and totally loyal to the Halflings.

It may seem odd that a human female would mate with a Halfling ‘millionaire’ but it does happen.