Teleporters are an advanced derivative of warp-engine technology and hails from the later part of the Dark Age era. They are highly complex archaeotech devices, far more complex than even the warp drive, and jealously guarded by the Adeptus Mechanicus. These devices are never given to other institutions of the Imperium and are always within the direct control of the Adeptus Mechanicus at all times. In base terms the Teleporter tears a path through the living fabric of the Immaterium, a tunnel through the nightmares of mankind, to deliver the traveller to a remote destination in an instant.

The Teleporter creates two Geller Field Emitters simultaneously. Unlike the emitters found in warp drives which line the outer surface of the spherical cage (the phase space within) and produce a sphereical Geller Field, the emitters constructed by the Teleporter are shaped like a torus. The torus shaped Geller Fields are called Warp Gates, or simply 'gates'. If the two gates are separated from each other, and if fed with enough power, a tunnel will form between the two. This tunnel is called a 'Geller tunnelling Event' by the Adeptus Mechanicus, or a 'wormhole'. The further apart the two gates are moved the more power is required to create and maintain the wormhole. What is special about the Teleporter is that one of the torus gates can be projected from the device to a distant place. This projected gate is referred to as the remote gate (or 'drop gate'), whereas the gate that is not projected is referred to as the local gate (or 'the door'). As Geller Fields propagate through the warp, they are not impeded my matter and the remote gate can be projected deep into structures such as Interstellar Ships, Space Hulks, and subterranean bunker complexes under a planet's surface. Teleporters are near instantaneous in travel, and so it is faster than a drop pod at getting users to the surface of a world. It is this deep strike, and rapid deployment features, that makes the Teleporter the transport system of choice for the Terminator élite of the Space Marines.

The Teleporter's remote gate is projected by two concentric rings of P-Field emitter arrays. These two rings are massive. The outer ring has a diameter of over a hundred cubits across, surrounded with great plasma feeds converging at its epicentre, nested in a techno-Gothic maze of twisted pipe and machine. Each ring mounts an array of P-Field emitters, on servos, which can be targeted at a specific point. The local gate sits within, and it totally contained by, the inner ring. The entrance it creates is no more that a few cubits across, large enough for Terminators, or even Dreadnought to pass through.

Teleporters use a phenomenal amount of power, as they are creating two 'overcharged' Geller Fields at the same time, they use twice the power of a warp drive to initialise and maintain. These power systems have to be separate from the rest of the ships systems. The visible part of the Teleporter is merely the tip of the iceberg, within the ship it's a titanic superstructure taking up hundreds of decks within the massive Interstellar Ships like the mighty Space Marine Battle Barge. The Teleporter is powered by tower P-field capacitors driven by the burning heart of six auxiliary plasma-star engines (enough to power six Interstellar Ships!).

All the Teleporter systems are separate and isolated from the rest of the ship, the Adeptus Mechanicus ensure this, as the Teleporter is a self contained ship of it's own and fully capable of a warp jump. This is why all Teleporters have a navigator, not only to see through the warp and control the targeting of the remote gate, but also to pilot the Teleporter 'ship' in case of an emergency jump. 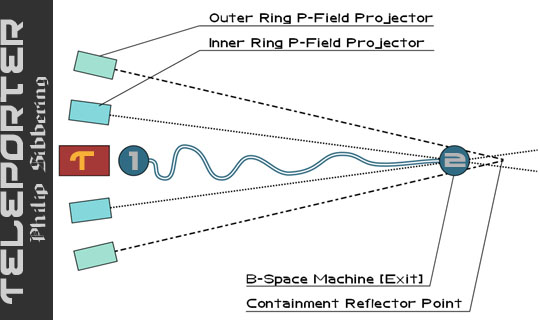 This ring projects deep into the target such as a spaceship or buried bunker complex, or out to some distant point on a planets surface. The narrow field arcs intersect to create a 'cone', where the point they all converge is called the apex. The field is strongest at the apex and the initial distortion manifests as ionised air and charged negative particles. It is the apex that is he target point of the inner ring.

The Inner ring uses the apex as a reflective backer for the creation of the border space engine, very similar in concept to a warp engine. In many ways this part of the process could be thought of as a projected Geller Filed. However once built instead of dropping the whole engine into the warp, it drops halfway. The part in the warp is like a semispherical geller field pushed into the 'sea' of the warp, yet warp energy can not pass or bypass through into the Materium.

The local gate is created in much the same way as a Geller Field is created in an Interstellar Ship, except the field is turned in on itself

A similar gate is produced locally (Marked as '1'), and drops a similar Geller bubble into the warp. The entrance is ringed with plasma-fire, its centre a void of pure darkness. To look into this field is to stare into hell, the utter blackness sucking in your mind and plunging you into sea of rabid daemons clawing at the outer 'surface' of the field, and the emotions of the damned flood into your mind. Few have the fortitude to look upon such horror.

If the Geller fields of the two gates (1 and 2) match, and power level is sufficient for the distance, they instantly snap together creating a tunnel through the warp. This geller tunnel is normal space through the warp. It is solid to a degree and you can walk on it.

//By harmonising both gates simultaneously the two gate's Geller Fields distort towards the other via strong attraction to a critical potential is reached initiating a Geller Tunneling event which snaps the two Geller Fields into one, generating a 'wormhole' through the Immaterium.//

Through the Valley of Darkness

You can not see the Geller Field. To walk this warp path is to tread on the backs of daemons who curse your name. With each foot fall, the mere hint of reality, brings fresh daemons boiling into focus. A vortex of rapid dogs clamouring to be near you in order to gain form - yet repelled by your very essence. Their caustic malice drips through into the human mind, and those on the path are vulnerable to their influence. Only the most righteous can tread this path, to travel through hell, and emerge on the other side. None are unscathed.

Risks: A living 'chaos resistant' will is required to travel through a Teleporter. The Teleporter it exposes the individual to the warp where they become prone to instability and at risk of disintegration. The completion of the Geller Defence Ward is one’s own willpower. A very strong, and single minded, force of will is needed to complete the journey. Much of the 'tunnel' is created by the will and belief of the one travailing through it. A moment of doubt, distraction, or hesitation can cause a catastrophic failure and deliver the traveller to their destination as a writhing ball of flesh, materialise in a wall, or simply disintegrate - torn to pieces by the cyclone of screeching demons swirling around the collapsing tunnel.

Terminators Only: It is for this reason that only Terminators of the Adeptus Astartes (all those with Terminator honours) can tread this path. One of the rites of ascension to Terminator status is to walk the 'valley of darkness'. It is a journey none forget. I has been called 'Dante's Inferno'.

The Teleporter has been know to snap link into the web way, and in rare instances the harmonics within in the gate are such that it starts drawing warp energy to power itself and can lead to a stable wormhole, a new gate to the web way (the Eldar are never pleased about this little breach of their transport system!). Human devices are far more crude that Eldar devices, and these stable self-generating gates are never permanent, but they are effective and ge the job done.

There is a range of ancillary gear to enhance Teleporter function.

Improves the formation of a remote gate by housing and harmonic enhancement the containment reflector point. This greatly increases the range and accuracy of the Teleporter and allow teleports through dense matter (deep into Space Hulks).

An enhanced version of the Homer, much larger and powerful and boost the containment reflector point and confines the parameters of the remote gate. Using this device the range of the Teleporter is increased above that of the Homer. Teleporter gates are bulky equipment and are are often permanently installed in their location