This is a concept for a universal enclosure. One in a set of enclosures used throughout the Imperium. I’ll start out with a guestimate of the concept, true it up towards the end, and perhaps go into some of the consequences, and impact of this STC. 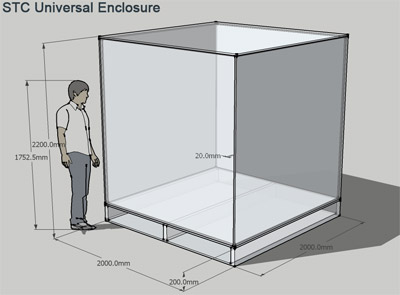 The enclosure will be a medium shipping container size, quite large, around 2m x 2m x 2m, perhaps with a built in pallet (2.2m high). In concept is is similar to a large reusable shipping crate (similar to something like the quick-crate system – but not in a patent infringing way, so I’ll 40K it up a bit with some auto-studs). It is made of a laminated ceramite composite material – similar to a very strong ply-wood except it can withstand bullet impacts and is fireproof. It can be flat packed.

This enclosure is designated as ‘universal’ as the Ad-Mec use it for roles aside from shipping. While it can be used to transport small items (munitions, weapons, devices, rations, spare parts, etc.) as a packing crate, it is also used as an outer case to STC appliance units (air-recycling, water storage, batteries, plasma engines, etc), and even used to house compact hab (pod) units.

This unit-in-a-crate concept allows the Ad-Mec to simply drop the unit in place (still in the case), secure it, hook it up, and it’s ready to go. This allows for very quick replacements – about the same time for modern day delivery teams to install a washing machine. The same enclosure is used in all roles and all pieces that make up the enclosure are interchangeable across the roles. The panels and parts used in the packing crate can be cannibalised for an appliance enclosure, and vice versa. 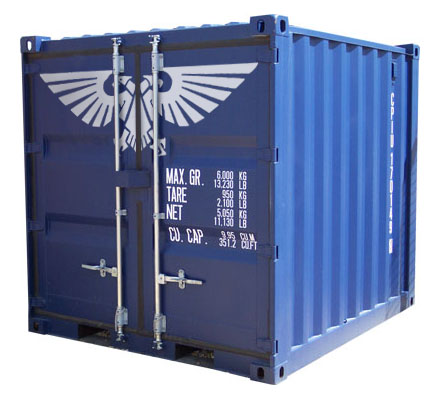 The following are the general roles that this (medium) enclosure is used for. It can easily be lifted by a forklift truck, and moved around any Imperial structure be it underground bunker, starship or Imperial building.

Crate: The majority of all Imperial goods are transported in this enclosure. This includes most munitions and weapons (lasgun, lascanon etc.) destined for the Imperial Guard. In this role of shipping container, this enclosure can be transported by any of the heavy lifting shuttles of the Imperial Guard/ Navy. This includes transport from the surface to orbit and vice versa. Perhaps these shuttles could have under slung grappling arms similar in concept to the Thunderhawk Transporter variant that can shift Landraiders.

Hive worlds would also revive goods, and STC work units, packed into these enclosures and all space ports and through-ways would have to be able to handle them.

Case: All appliances found on starship, industrial zones, hive world hab-units are housed in this enclosure. (This is why this size is so popular as a shipping crate: as everything in ships, industrial zones, and hives are this size – so all through-ways can handle it).

A lot of appliances have recycling and redundancy, so a laundry system would have water recycling units in the rare of the case with the washing machines to the front, a cooking system would have a generator units in the back and the cooking surface and ovens to the front with overhead extractor fans. Everything is self contained – everything has a built in power buffer/ storage. As the B1 is so large, several kitchen appliances can be delivered in one go (often as an island with access from all sides). There are many variants, but all fit into the b1 enclosure and are delivered in one go like a crate.

The self-containment is a very important redundancy system. A ship could loose power (main engines) and everything will still work. Air will continue to be processed, there is still light, people can cook food, refigeration still works etc. While units can be hooked up to be resupplied with fuel or power, the unit will always have built in redundancy and last for a very long time after it has been topped up.

As everything is self-contained it can be removed and replaced very quickly by the Ad-Mec with a new or reconditioned unit, and the damaged unit is taken back to a secure Ad-Mec facility for repair. As everything in contained within the unit, it is very easy to find out what is wrong with it once it is back at base. Citizens can be striped of their appliances and denied service agreements.

Architecture: This is an extension of the case concept. The Imperial Guard make use this enclosure containing a fully fitted and functional barracks block. Each enclosure has four pods and can accommodate 4 Troopers. It is a bit like the Tokyo style pod/ capsule hotel. Each bed within a pod is equivalent to standard UK size of a single bed (90cm x 190cm). The pods do not have to be removed form the enclosure and are built in (attached to the standard internal mountings). In addition each pod It contains under storage space (weapons/ uniform/ gear), water and food rations and limited air processing units, all mounted on a rail (slide out shelf). These blocks can be stacked with special framing sections. Each pod has it’s own armoured door.

The four pod blocks could be referred to as ‘quad-pods’, and ‘pod-blocks’. The pod-blocks, along with a super-structure frame, can be used to build a complete military base. All housed with extra external ablative armour, and internal walkways. These pod blocks are used in starships too. The blocks slide into a frame which is the same as the base frame. A whole regiment can be shipped to the surface along with their pod blocks, so they can quickly set up base.

Even some large logistic vehicles could contain a pod block, giving four sleeping units (used can be rotated in shifts). Same for airdropped outposts and bases consisting of a single pod block.

Finishing up the concept

Upon thinking about this some more, and looking through hundreds of different container types, I came to the conclusion that it’s basically Intermodal freight transport with the addition of ‘air transport’ because Imperial craft can actually lift them. The intermodal containers are an iconic industrial design, and seem like a good start point for an Imperial container (no need to reinvent the wheel!). Intermodal containers are built to ISO standard (a precursor or the STC?) and with a few (auto-)rivets could have quite a nice, beefy, Imperials feel to them. They are also used in architecture and this ties into this concept well (and allows a wealth of ideas to be nicked later, and incorporated into the design to add an extra level of realism). 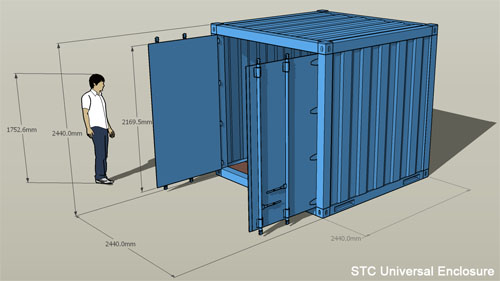 There would be a few modifications in that these STC containers are a cube (2.44m), so 8? long instead of the 20? and 40? versions we have now, and the side panels would have to be removable (hence the auto-rivets. auto-studs). The core frame is welded together and counts are ‘universal’ across all models and the twistlock system can be carried over and developed to make it into a giant Meccano set (as Meccano looks kinda 40Kish if the bolts are replaced with auto-studs).

Opposite is a Sketchup concept of the STC Universal Enclosure. I’m not sure it should have doors, or perhaps different doors (something with an Imperial Eagle?) that are attached to a frame which in turn is auto-studded to the enclosure.

For example: I  imagine a Plasma Engine can fit into once of these (stacked and linked up in series) and the internal panels could include bracing and hard points. Once the outer panels are removed the engine would look like a sphere braced into a cube frame. The inner panels could have cut-outs to hook up the system. I imagine the outer panels could be cut, and may have markings for standard connecting areas and clearances.

There could be many types of internal panel, and it’s the internal kit that determines the role of the enclosure, but the frame and outer panels are all the same across all roles.

As all worlds that take (STC) based tech from the Adeptus-Mechanicus would be able to handle this mid-sized enclosure – and so: all corridors are quite wide and high. This is a characteristic of all the STC designs, be they surface administration buildings, military complexes, underground bunkers, hives, or even the massive Imperial starships. All Imperial worlds, with the most advanced tech (thanks to the Ad-Mec), or old unclaimed worlds with STC, all have these large corridors.

The Space Marines were designed to retake old human worlds during the Great Crusade. All human colonies were once STC, that have the STC legacy in their design. Many have fallen in ruin and their STC is lost, but without the STC the humans would offer little resistance and nothing (STC wise) is worth saving and the Marines would not be needed (Imperial Guard/ Navy).

It’s the worlds that still have STC that are the problem. When such a world would not comply, and the world had enough STC systems to be able to put up a fight (and the Ad-Mec desperately wanted to acquire their tech) it is the Marine that are called in to take out the STC defences in special ops lighting raids (so the big guns can come in). It is the retaking these specific STC enabled worlds, while limiting damage, that the Marines excel (and one of the reasons the Ad-Mec were all for them, and continue to support them).

Marines are kept on after the Horus Heresy, and the known threat of chaos, as Imperial Worlds often turn renegade and Space Marines are needed to retake them if their STC defences are formidable. All the time limiting damage to the STC is of prime concern to the Adeptus Mechanicus.

Marines have no trouble moving through STC structures – no matter where they are.